Daniel Powter’s best days are ahead.

The man whose signature song, “Bad Day” became a #1 worldwide smash and was named Billboard song of the year in 2006; took an extended hiatus while dealing with his own personal struggles. With the weight finally lifted off his shoulders Daniel is now back, with a vengeance.

On August 14th, Daniel will unleash “Turn on the Lights”, a refreshing set of radio-ready songs that express universal feelings of life, love and the human emotion.

From the infectious grooves of  “Cupid” and “Crazy All My Life” to the emotional messages in songs like “Come Back Home”, “Except the Blue” and “Tell Them Who You Are“; Turn On The Lights showcases Daniel at his best!

I had the chance to speak with Daniel and get his thoughts on the new album as well as the genesis of his #1 hit, “Bad Day”.  As I quickly discovered, the optimism Daniel expresses when discussing “Turn On The Lights” is as infectious as the melodies themselves.

gJg: Why did you take such a long break in between albums?

DP: After 2 1/2 years of touring the “Bad Day” record, I was really starting to get burnt out. Around the same time, I was also dealing with a divorce, substance abuse and a few other issues as well. I was becoming a bit discouraged. It wasn’t until a year or so ago that something changed for me.

I was sitting with my 9 year old daughter at the piano working out some melodies when she told me that she really wanted me to come back.  So, with her inspiration and some others encouraging me, I started writing a new record and am really glad that I did. I’m also extremely grateful to all of the fans, both here and internationally, who have welcomed me back. I’m looking forward to getting back on the road.

gJg: Why the title, “Turn On The Lights”?

DP: I think a lot of it had to do with the fact that I was in a pretty dark place. I got addicted to substances and alcohol when I got off the road; which really threw me into a spiral. I also became a bit secluded and the divorce was hard on me as well.

Then, one morning I woke up and said: “I’ve got to change my lifestyle!”  It was almost as if someone had just turned the lights on for me and I realized that my life didn’t have to look like this. So I got sober, went through the divorce and wrote this new album. 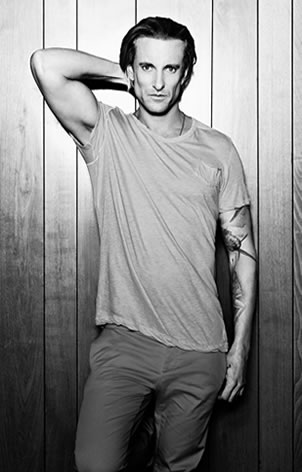 gJg: The songs on this album seem to reflect universal feelings.

DP:  I’ve always been about making sure that the songs I write aren’t just about me. With the time I had off, I was able to experience so many different things; things that carried through into my songwriting. I really wanted to write songs that other people can relate to. This record is for everyone.

DP: Cupid was the first song I wrote for the album and a song that I wrote to cheer myself up. Everyone wants to find someone to have fun and spend time with and after everything I had been through, I wanted to experience those feelings again too.

I wrote that song after I came back from a ten-hour training mission with the Navy on the USS Ashcroft; a nuclear submarine stationed in San Diego. I was amazed with just the attitude these young men have who were going away to be at sea for such a long time. It inspired me, and really put things into perspective. The song was written for them, and for them to come home safely.

DP: Thank you! Some people might think that I get tired of performing that song, but the truth is, I still love it. Whenever I play it live, there’s a new audience participating in it with me and keeping it fresh!

gJg: How did you write it?

DP: I had written the melody for the song and was getting ready to drive to the studio to record. As I was walking downtown towards my car, I noticed a sign hanging outside of a travel agency. There was a picture of a huge cruise liner ship on it and a caption that read: “Having a Bad Day?” with the emphasis being on taking a cruise. I thought that was cool and that’s actually where the idea came from.

So, I wasn’t having a bad day or anything like that. I was just walking along, fit what I saw into the chorus, and the rest is history! <laughs>

gJg: Congrats again on the record and hope to catch you on the road.

DP: Thanks for your time!

Article first published as Daniel Powter Turns On The Lights on Technorati.