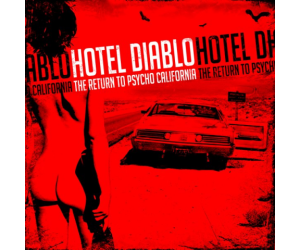 Alex Grossi is considered one of the hardest working guitarists around. His resume includes working with such artists as Quiet Riot, Steven Adler (Adler’s Appetite), Jani Lane of Warrant, Beautiful Creatures and Dizzy Reed and Gilby Clarke (Guns N’ Roses).

After coming off a grueling World Tour with Adler’s Appetite in 2011, Grossi (along with vocalist Rick Stitch) parted ways with Steven Adler and together with bassist Mike Duda and drummer Mike Dupke formed Hotel Diablo.

The band would soon join forces with producer (and former Guns N’ Roses guitarist) Gilby Clarke and release their debut album, ‘The Return To Psycho, California”, an eleven song arsenal of riffs and grooves that hard rock fans have been longing for. With a worldwide deal with Scarlet Records and Entertainment One in place, the sky’s the limit for Hotel Diablo.

I spoke with Grossi about Hotel Diablo as well as his work with Adler’s Appetite, Quiet Riot and the late Jani Lane.

Check it out Here.