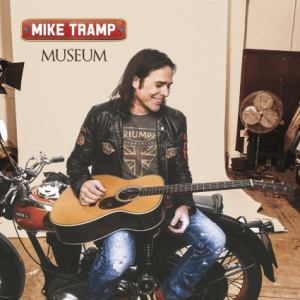 It’s why he’s spent the better part of the past two years touring the world with just a guitar, playing everywhere from sports bars to small hunting lodges deep in the Pennsylvania wilderness, places where Tramp says he feels right at home.

And although there have been glimpses of Tramp’s inner-self in his White Lion past (“When the Children Cry” comes to mind), perhaps there’s no better reflection of Tramp’s soul than his new album, Museum, which will be released August 18.

From the Seventies vibe of songs like “Down South” to his own frustration (“Trust in Yourself”) and personal healing (“Better”), Tramp’s pain, love and frustration are on full display. Listening to Museum, one quickly discovers the bloodline that is Mike Tramp. There’s no makeup or make believe. Just plenty of truth.

I recently spoke to Tramp about his new album, gear and the satisfaction he gets from his vagabond touring lifestyle.

GUITAR WORLD: How would you describe this new album as a whole?

It’s a true reflection of me as a songwriter and about not being controlled by the “image” anymore. It’s knowing that the guidelines, doors and walls that surrounded White Lion back in the Eighties just don’t exist for me anymore. I’ve taken a step to try to create something that’s recognizable and has connections to my past, but is still part of the future.

Why the title Museum?

I fell in love with music when I was growing up in the late Sixties and Seventies, back when so many bands would just record an album and not worry about whether or not it would fit in with the other songs they’ve done before. I remember being in the studio and saying, “This is like being inside of a museum in its own time.” These are displays of songs that represent who I am.