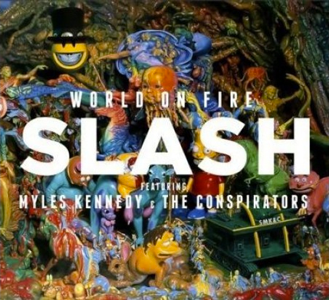 Over the course of his illustrious career—one that includes time in Guns N’ Roses, Slash’s Snakepit and Velvet Revolver—Slash has amassed album sales of more than 100 million, garnered a Grammy (to go with his seven nominations) and was recently inducted into the Rock and Roll Hall of Fame.

Slash also has seen plenty of success with his solo albums. Both his Slash and Apocalyptic Love offerings landed in the top five of the Billboard albums chart.

World On Fire, which will be released September 16, is Slash’s second album with his official band, the Conspirators, which features Myles Kennedy (vocals), Brent Fitz (drums) and Todd Kerns (bass).

From the infectious up-tempo aggressiveness of the album’s title track to the sexual politics of songs like “Battleground,” “Dirty Girl” and the coming-of-age “Bent To Fly,” the 17-song opus delves into a wide range of topics. World On Fire also features a rocking instrumental, “Safari Inn.”

Produced by Michael “Elvis” Baskette (Alter Bridge, Falling In Reverse, Incubus), World On Fire is a diverse record that covers a multitude of musical feels with a rawness and energy that’s reminiscent of Slash’s early work with Guns N’ Roses.

Make no mistake about it: World On Fire is not a solo project. It was recorded by a band with all four members contributing their strengths as a whole.

Slash is touring with Aerosmith on the “Let Rock Rule” tour. I recently spoke with him about World On Fire, touring, his love of Les Pauls and, of course, some of the most memorable moments from his career.

Interview with Slash by Clicking Here!