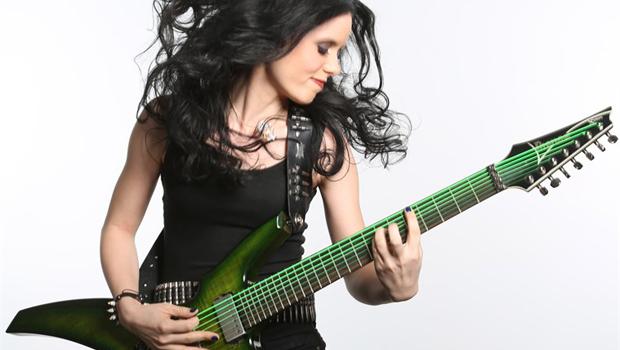 Guitar fans might remember seven-string guitarist the Commander-In-Chief from her Zigeunerweisen Op. 20 guitar-duel video, which she made with classically trained guitarist Thomas Valeur.

That video, which was premiered on GuitarWorld.com, was one of the site’s 10 most-watched videos of 2013.

Late last year, the Commander teamed up with another classical guitarist, Craig Ogden, for a new album of guitar-driven goodness—2 Guitars: The Classical Crossover Album—that takes metal virtuosity back to its classical roots.

Ogden, the principal lecturer on guitar at the Royal Northern College of Music in Manchester, England, was recently featured as one of the top classical guitarists of all time by ClassicFM.

In addition to inspired versions of Caprice No. 24 by Niccolo Paganini (the Italian composer whose music has influenced scores of guitarists, including Yngwie Malmsteen) and an instrumental version of Carlos Gardel and Alfredo LePera’s tango, “Por una Cabeza,” 2 Guitars also showcases the Commander’s vocal skills on an original song, “Let It Go.”

We also should add that the Commander’s Caprice No. 24 video was one of GuitarWorld.com’s 10 most-watched videos of 2014.

I recently caught up with the Commander and asked her about her new album with Ogden, her gear and more.

GUITAR WORLD: What made you decide to do a project like this?

After the guitar duel, I noticed a lot of comments from people asking about the next one. I had only planned on doing one, but everyone kept saying how they couldn’t wait for more. So I thought it’d be cool to do another one.

The piece I found was the massive “Introduction and Rondo Capriccioso” [by Camille Saint-Saëns]. Once I checked it out, I knew it was going to take me a while to learn. So rather than just doing one piece and video at a time, we decided to instead make an entire album.

Interview with The Commander in Chief
By Clicking Here!