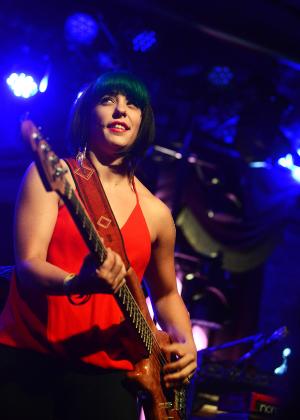 From her early days working with her brothers in the power trio Trampled Under Foot, bassist/vocalist Danielle Nicole has always found an outlet for her creative, blues-infused songs.

Collectively, Trampled Under Foot recorded five albums, with its most recent, Badlands, reaching Number 1 on Billboard’s Blues Albums chart in 2013.

But as the band wound down after 13 years, Nicole decided it was a good time to branch out on her own. Her debut solo album, Wolf Den, which will be released August 21, represents the fruits of her labor and is a treasure trove of blues, funk and groove.

Produced by Grammy-winning producer and guitarist Anders Osborne—whose songs have been covered by the likes of Brad Paisley and Jonny Lang, Wolf Den is a collaborative, New Orleans-themed album buried deep in tasty, blues-based rock.

I recently spoke with Nicole about Wolf Den, working with Osborne, her gear and more.

GUITAR WORLD: To someone who might not be familiar with your sound, how would you describe Wolf Den?

It’s an extension of the songwriting from my days playing with my brothers in Trampled Under Foot as well as some songs I’ve never had a chance to record. A few of the other tunes were ideas Anders helped collaborate on and develop with me. The album as a whole is a collaboration rather than all of the songs stringing together.

How does the songwriting process start for you?

Most of the time it starts with a bass line groove or melody, and then I’ll start writing lyrics to it. If it’s a specific instance or taken from experience, it usually starts with lyrics.

What can you tell me about the track “You Only Need Me When You’re Down?”

That was a tune Anders and I had written together. At the time, I was in a bad place in a relationship and had the line, “You only want me when you need me. You only come to me when you’re in trouble.” Anders came up with the groove and we started expanding it from that situation. That’s how it came about.

With Danielle Nicole by Clicking Here!