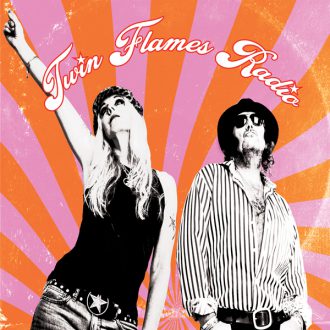 Vixen bassist, Share Ross describes her new project with husband Bam, Twin Flames Radio, as a love affair from the heart and a crime of passion. The album, more than a decade in the making, draws from the duo’s eclectic 1970s musical sentiment; with a lush, layered production as well as a multitude of harmonic-laden and hooky songs.

Case in point is the infectious track, “Peace & Love & Rock & Roll,” a song with a relevant, anthemic chorus complete with a John Lennon-esque “Happy Xmas (War Is Over)” refrain performed by members of The School of Rock. Twin Flames Radio also has its share of musical guests, which includes Tyketto guitarist, Chris Green and Vixen’s Janet Gardner,

With Twin Flames Radio, Ross – already well-known for her work in Vixen as well as 90’s super-group, Contraband, Bubble and more recently, as bassist in Joe Elliot’s Down ‘n’ Outz, and Bam (Bubble, Jo Dog & The Desperados) have created an album that combines the best elements of 70’s rock and pop with a polished, 21st century charm.

AXS recently spoke with Share Ross about Twin Flames Radio and more in this new interview.

AXS: How did the Twin Flames Radio project come about?

Share Ross: It was something that’s been happening for a really long time. Bam and I have had a band, Bubble, since the nineties. But after we moved to Florida and started playing again, we discovered that our songwriting had changed. The songs we wrote just didn’t fit the “Bubble” wrapping, so many of them sat for a really long time. It took a bold step to make this project, but we were committed to it.

SR: It was all over the place. I’m one of those people who believes that you don’t actually write a song. You have a muse and the song is given to you. A lot of what you hear on the album was actually recorded during the writing process. In fact, 75% of the original vocals on the song, “Got That Thing” were made up on the spot. Other songs, like “Peace & Love & Rock and Roll” began with Bam just sitting down with the guitar.

AXS: You mentioned “Peace & Love & Rock & Roll.” What else can you tell me about it?

SR: Lyrically, it’s written from the stand point of still being here with all of our friends. We’re all older than we ever thought we’d be, and we’re still doing things in music. The musical approach was very interesting. As we were writing we kept thinking, Ok, what Would [David] Bowie do? What would T-Rex do? What would Big Star do? It was a totally conscious decision.

AXS: How did the kids from The School of Rock get involved on the track?

SR: There’s a point in the song where I had the idea of having the vocal part sound like John Lennon’s “Happy Xmas (War is Over).” Bam and I knew that we wouldn’t be able to sing it like little kids, so I thought of the School Of Rock. We went down there with microphones and five adorable girls sang it. It was really cool.