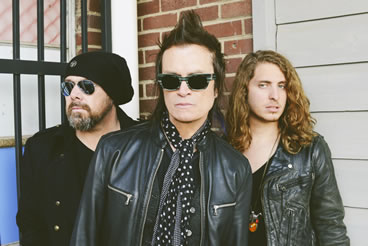 Former Deep Purple and Trapeze bassist Glenn Hughes, who has spent the recent past guesting with everyone from Black Sabbath to Earth, Wind & Fire, formed Black Country Communion with Joe Bonamassa, Jason Bonham and Derek Sherinian in 2009.

Now Hughes and Bonham are back with a new trio — California Breed — which is handily rounded out by 23-year-old New York City guitarist Andrew Watt.

The band’s self-titled debut, which was produced by Dave Cobb (Jamey Johnson, Rival Sons), was recorded live and direct to tape. And while you will find several examples of Watt’s six-string prowess throughout the disc, you’ll also discover he is just as comfortable when he’s falling back into riffs and rhythm work.

California Breed’s debut highlights the best of all three virtuosos without overstating the obvious. Because in the end, it really is all about the groove. I recently caught up with Watt to discuss California Breed.

GUITAR WORLD: How did California Breed come together?

I was at a party of a friend of mine, Julian Lennon, when he brought Glenn over and told me that the two of us really needed to meet. After talking with Glenn for a while and discovering we had so much in common musically, even though there’s a bit of an age gap, we decided to get together to write a few songs.

So we hooked up in LA, went into a studio and a few hours later we had written two songs, “Chemical Rain” and “Solo.” What’s cool is that the songs we wrote didn’t seem to be “Glenn Hughes” or “Andrew Watt” songs. It was this brand-new collaboration neither of us had expected. Right from that point, it started feeling like a band. That’s when Glenn called up Jason to see when we could record. Everything just unfolded in a very natural way.