While growing up, Elina Madison recalls being at her grandmother’s house watching TV and being so enthralled with what was on that she turned to her grandmother and told her that she wanted to become an actress. From that moment on, she’s never looked back or lost sight of her dream.

Elina found that there weren’t a lot of opportunities to act in her home state of Wyoming so she eventually made her way to Los Angeles where she has since become a sought after model and actress and been awarded the title of “scream-queen” based upon her memorable roles in the realm of horror.

In one of Elina’s latest projects, “HUFF” she plays Lorelei, the dysfunctional wife of Huff, an abusive and asthma suffering stepfather who’s involved in a lucrative drug deal. Seemingly oblivious to the abuse that’s going on around her, Lorelei (a stripper by trade) delivers one of the most memorable lines in the entire film:

‘We need the money and the pole’s not going to dance by itself.”

Lorelei eventually comes to her senses and realizes that she has to get her children out of there. She secretly takes the money intended for the drug deal and gives it to her daughters to flee and start better lives for themselves. This series of events triggers a chain of rage-induced asthma attacks as Huff attempts to locate the three runaways and recover his money. Elina’s amazing, emotional scene on the couch with co-star Charlie O’Connell (Huff) sets the mood for the entire second half of the film.

“HUFF” will be released domestically in April and under the title “Big Bad Wolf” for international markets.

Elina’s next film role will be as the wife of the Prince of the undead in Creep Creepersin’s Dracula.

Aside from her beauty and acting prowess, Elina is one of the most down to Earth and coolest people I’ve ever had the pleasure of speaking with.

gJg: What’s the premise of HUFF?

EM: HUFF is actually a twisted version of the story of “The Three Little Pigs” with Huff being the wolf and the daughters being the three little pigs. Huff also has asthma which goes along with the lines of the story of “huffing and puffing”. Huff is up to no good and making a deal with drug money that’s not his. My character finally has had enough and realizes that she has to get her children out of there. So she steals the money, gives it to them and tells them to leave. It’s because of her actions that there are some unbelievable consequences.

How did you prepare for the role of Lorelei?

EM: Lorelei is just so caught up in her own little world. She’s an alcoholic mother in denial about what’s going on between her daughters and Huff. I’ve done some crazy characters before, but never one this complex. Getting into that kind of mindset took some work.

Tell me a little about your next film, Creep Creepersin’s Dracula.

It’s a different spin on the classic story but it’s also more about the perception of Dracula and the reality of everything. I play Francine, his wife who you don’t know whether is a “good” wife or an “evil” wife up to no good. Everything is taken completely different depending on how you’re looking at it.  It’s scheduled to be released in January.

EM: Right now I’m shooting a show for Spike TV called ‘Urban Tarzan’. I play a well to do wife who didn’t go to college and got married for money and have been enjoying a life of leisure. My husband and I live in a big house and we’re going through a divorce. He wants me to take this horrible deal and I wind up fighting him for the house. He ends up putting a crocodile in the swimming pool hoping i jump in and don’t notice. [laughs]

It’s funny for Spike and has that crazy element to it.

THIS GIRL IS ON FIRE

Elina Madison is a rising star who will be seen all over the world in the coming months! Her career is truly on fire. 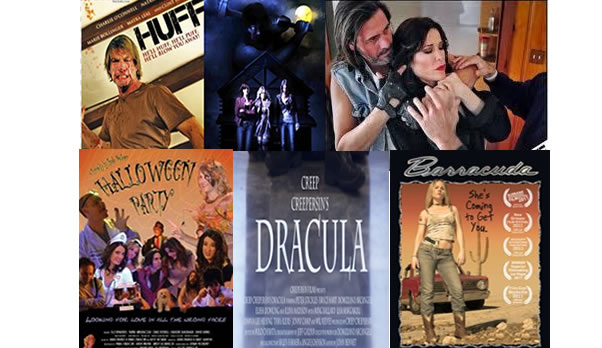 – In April 2013, she’ll star as the desperate mother and abused wife Lorelei in Huff (with Charlie O’Connell).

– In January 2013 Elina stars as Francine, the beautiful and loyal wife of Dracula in Creep Creepersin’s Dracula.

– Look for her in the highly acclaimed film Barracuda, starring opposite Christine Oldham as the well to do socialite “Lisa.”

Article first published as A Conversation With Actress Elina Madison on Technorati.