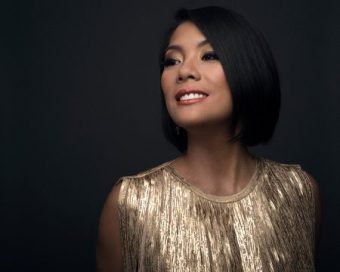 With a specialty in Christmas music, singer-songwriter Elizabeth Chan’s passion for the holiday has driven her to a career that’s unique from other recording artists. Case in point, her new album, Best Gift Ever, which is sure to become a soundtrack of the season.

Led by the infectiousness of the album’s title-track and Chan’s original renditions of such classics as “O Holy Night,” “The First Noelle” (aptly re-named in honor of her daughter), and the unearthed classic, “For Unto Us,” Best Gift Ever gives listeners a refreshing mix of tradition and universal acceptance.

In addition to the new album, Chan is also lending her voice to various charities and radio shows across the country. For her, it’s an honor to not only share her music with the world, but also to give back for the greater good.

AXS recently spoke with Elizabeth Chan about Best Gift Ever and more in this exclusive new interview.

AXS: What inspired you to take on a career as a Christmas songwriter and producer?

Elizabeth Chan: I’ve always wanted to write Christmas music from a very young age. When I was growing up, there was a radio station in New York City that went all Christmas every year, and I remember whenever the station would turn me and my sister would leave the radio on twenty-four hours a day. It wasn’t something I knew I could make a career out of until after I already had another career. I always knew I wanted to be a musician, but eventually chose a different path. Then about eight years ago, I had what I guess you’d call a quarter-life crisis. I thought, either I could keep working at the career I was at or do something that makes me happy. I think people are given one shot to do something with their life, and for me, it was music. I thought back to the one time in my life when I was truly happy, and that was when I listening to Christmas music and writing poems. I decided to give myself a shot, and here I am.

EC: I’m highly inspired by my family but also approach songwriting like a muscle you flex. I write Christmas music all year long. In the beginning, I’d force myself to write at least one Christmas song every day. Most of them were bad but I quickly amassed a vault of Christmas music. I now have my own sifting method where I’ll wait and see if I can recall a melody and lyrics of a song I wrote several years later. That’s how I know it has a classic, timelessness to it.

AXS: Let’s discuss a few original tracks from Best Gift Ever, starting with the title track. What’s the story behind it?

EC: My husband is the most-simple, happiest guy on the planet who never wants anything for his birthday, anniversary or Christmas. I’m always prodding him by asking, “What do you want? What do you want? What do you want” [laughs]. The bridge is always his answer: “Don’t worry about me. I have everything I want.” It’s also a universal theme with people. Every year, there’s always that sense of hey, what do you want this year? It was a good opportunity to write a song about the way everyone feels.