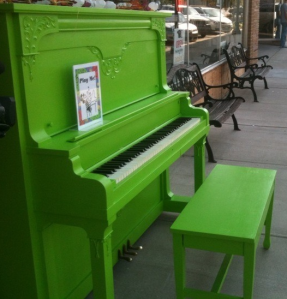 I remember a song we used to sing in kindergarten at Porter Elementary School. It was in my afternoon class and every so often Mrs. Rapp would gather a gaggle of us five-year olds together around this lime green, out of tune upright piano.

We had just finished eating our vanilla wafer cookies and half pint cartons of milk and were settling in to a nice sugar coma when she would begin to play a little diddy that went something like this:

Then she’d go around the class and ask us to yell out what we wanted to be. I was confused. To a five-year old being a grown up felt like a million years away and even then I knew that I’d probably change my mind about it at least a million times before it actually arrived.

But as my turn approached my confusion turned into stress. I always wanted to say something cool that wasn’t the typical fireman, doctor or astronaut that everyone else in the gaggle was saying. And it certainly wouldn’t look right to be a copy-cat of someone else. But in the end I chose the fireman and to this day still don’t really know why (maybe it was the cool red truck).

What do I want to be?

One of the earliest things I remember was wanting to be Spiderman when I grew up. I wasn’t too keen on getting bit by a radioactive spider mind you, but a kid’s gotta do what a kid’s gotta do.

You can even ask my brother if you don’t believe me. He caught me many a time climbing the walls in my sleep yelling out that I was indeed the wall crawler. And on warm summer mornings after a rain storm I remember walking past spider webs shimmering  in the sunlight off of my front porch and saying to myself: “someday…..someday”.

I think the superhero theme was something I always aspired to be. I was very introverted growing up and some how could relate with those guys having a “secret”. Maybe it was the feeling of being able to put a mask on and suddenly become someone larger than life. Someone people admired.

That’s who I wanted to be…then.

Over the years I’ve gone through phases of who I want to be. A fireman, a doctor, a rock star, an electrician, an actor. Strangely, I wound up being a Clinical Systems Analyst (something that looking back would have floored Mrs. Rapp if I had told her) but in many ways I’ve been all of the other occupations at one point or another:

– I was a fireman who put out the ultimate pierogie fire that you can read about in a previous blog.

– I’m a physician whenever my daughter trips and falls on the sidewalk.

– I’ve been a rock star (albeit not professional, yet) for perish the thought, 25 years now.

– I can change a light bulb and swap out a light fixture with the best of them.

– I’m a great actor. Just ask me when a user calls me at work because they keep locking themselves out of their computer.  I play the role of “Happy, Helpful Jim” to a tee.

I may not have become Spiderman but I think it’s safe to say that in some ways I’ve even achieved being a superhero too. I can see it in my daughter’s eyes with simple things like when I’m helping her with her homework or when she watches me teach the dog how to sit and shake hands.

But I don’t think I’m finished. I’ve been wanting to be a writer for quite a while too. Oh sure, I’ve gotten a letter written to a fictional vampire published in Dynamite magazine at age eleven. And I’ve also been featured in the Letters to the Editor in a Conan the Barbarian comic book. But I want more. And I think everyone feels that way because there’s just an endless amount of things to experience. There’s nothing we can’t do. The sky is the limit as they say and there’s always some thing else to “be”.

So if Mrs. Rapp gathered me around that lime green out of tune piano right now and asked me the question again, I’d probably still be confused. But this time I think I’d have to tell her the truth –  that I’m still trying to figure out what I want to be when I grow up.