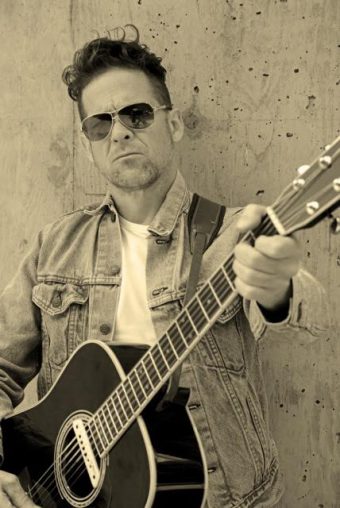 After suffering a shoulder injury in 2006 and being unable to play, former Metallica bassist Jason Newsted decided to put down his instrument and pick up a brush. It was during this time that he began to express himself through painting. Since then, he’s become an accomplished modern artist.

Newsted’s trademark style includes mixing soil—from wherever he happens to be painting—into his acrylics, creating a highly dramatic effect.

Although he’s kept a fairly low profile following Metallica’s 2009 induction into the Rock and Roll Hall of Fame and his successful Newsted project, nearly a dozen of Newsted’s uniquely inspired works will be on exhibit as part of this year’s Art New York.

Art Miami, the leading producer of international contemporary and modern art fairs, will present the third edition of Art New York and the second edition of CONTEXT New York at Pier 94 May 3 through May 7. The two highly anticipated fairs will showcase more than 120 international contemporary and modern galleries from 50 countries.

I recently spoke with Newsted about his upcoming exhibit, Metallica and more.

How did you become involved in this year’s Art New York?

I had the chance to meet with the owner of Art Miami. He loves metal, and after we hung out he saw some of the pictures I had and invited me. So I’ve been traveling around to different parts of the country these last few weeks getting canvases together from the past seven to eight years. It’s my first time in an international exhibit, and I’m very excited about it.

Was art something you were always interested in as a child?

I grew up in a rural area and took some classes when I was younger. That was where I was first introduced to acrylics and mixing colors together. Then about three years later, I got hit by music and everything else went on the back burner for 30 solid years.

When did you get back into painting?

Once I got in Metallica and started working on other projects, I was always keeping myself super-busy doing a lot of things and moving around a lot of gear. I wound up injuring my shoulders and needing surgery. During my recovery, I was disabled from playing my instrument in any way I had been used to, and I had to learn to use both of my hands out of necessity. For me, music was a full-time thing, and when I wasn’t able to release that way, I started using my hands to get out all of the creative energy I had usually put into the music.

I was in Montana at our ranch with only one arm going and felt the need to go out in the barn and paint. I found these old drum heads and whatever paint was lying around—Rust-Oleum and John Deere green and yellow. I turned the drum head over and oozed the paint in. Then I soaked a snow brush in the color and splattered the paint onto whatever I was painting on.

I got to the point to where I wouldn’t even have to touch the canvas to make circles, faces and figures. That was the introduction. Then as my arms got better, I started touching the canvas more. That’s how the transference of the energy went from the fucking metal monster to putting it on canvas. The consensus from people who have the works is that the paintings look like the music sounds.