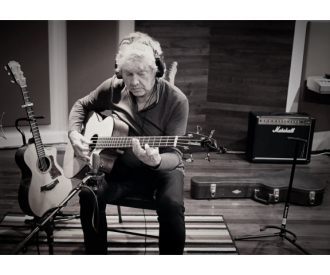 The album contains some of Lodge’s most personal songs and even features guest performances by former Moody Blues members Ray Thomas and Mike Pinder.

I recently spoke with Lodge about the new album and some highlights from his career with the Moody Blues.

GUITAR WORLD: It’s been quite a while since your last solo album. What spawned this project?

I’ve been thinking about making an album for a few years now. It was based on a thought process I had where the future is always in reach but the past is gone forever. But I didn’t want to make an album that was retrospective. I wanted to make one that was about who I am today.

How would you describe the album as a whole?

I always look at the song “10,000 Light Years Ago.” When I wrote that song, I knew that’s what the album was going to be called. Then when I looked at the lyrics, it really told me what I wanted to write about. Standing there fearlessly and thinking about what’s going on in the world. To me, it’s an eclectic collection of songs that all end up 10,000 light years ago. Everything from the past has made me what I am today.

Let’s discuss a few tracks from the new album, starting with “In My Mind.” How was that song conceived?

I remember I had a flute line going through my head along with chords that kept getting bigger and bigger. I wanted the keyboards to create this audio/visual universe and for the guitars to run through it all. Then I wanted it all to easily come back down into a very easy, close lyric and twelve-string playing away and then building back up. It was a visual image in my mind.