An amazing young actress whose love of the art began at the early age of four following frequent family trips to the theater, Michelle has been honing and perfecting her craft ever since. And her hard work is paying off.

Having made her mark in commercials, television and film, she’s someone who’s performances you’re sure to remember.

Michelle’s already made appearances on shows like “CSI: New York”, “Castle” and “Cold Case” and starred alongside Sandra Bullock and Robert Picardo in films like “Miss Congeniality 2″ and “Sensored” respectively.

Michelle can also add “scream queen” to her resume as evidenced by one of her recent movies, the psychological-thriller “Rogue River” which will be released in the US on June 5th.

Michelle plays the role of Mara, a distraught girl whose father has recently passed away. After saying goodbye to her brother (Chris Coy) she embarks on a journey to the place where the family had spent many camping trips together to scatter her father’s remains.

In her moment of grief and reflection she encounters Jon (Bill Moseley), a seemingly nice-enough gentleman who offers her a ride back into town after her car is towed. Mara decides to take him up on the offer and it’s a decision she will forever regret.

In this interview with Michelle, we’ll learn all about this amazing actress and her journey to “Rogue River”. A role that not only required her to turn on the tears but also tested her physical toughness as well. We’ll also discuss what future projects she has planned as well as what she likes to do when she’s not acting.

goJimmygo (gJg): Michelle, it’s so great to speak with you!

Michelle Page (MP): You too!

gJg: “Rogue River” is going to be released in the US on June 5th is that correct?

MP: Yes, June 5th and I’m very excited about it. I’ve just recently watched it again while we were filming the DVD commentary and it was so good to see it again and remember everything about it.

gJg: Were you always a fan of the horror genre?

MP: Actually, I’m one of those people who gets scared really easily by them. But I love acting in them! <laughs>

gJg: What attracted you to the role of Mara in “Rogue River”?

MP: I had a supporting role in a film Kevin Haskin wrote and produced called “Sensored” with Robert Picardo. Kevin co-wrote “Rogue River” along with Ryan Finnerty and thought I’d be great in the role of Mara. He was right. Once I read the script I immediately called him up and said: “YES!”

MP: I loved how unique and twisted the story was. The role was right up my alley. Of course, I was just thrilled to have the opportunity to work with Kevin and Jo Haskin (Producers) again. I was honored that they wanted me to do this project with them.

gJg: Did you know at the time that Bill (Moseley) was also going to be involved?

MP: I was actually the first person cast so I wasn’t aware. I passed the script along to Adam Targum and Zachery Ty Bryan who produced it and we got the ball rolling.

Shortly there-after Bill, Lucinda (Jenney) Michael (Cudlitz) and Chris (Coy) all came on board. We filmed for about a month in Oregon. 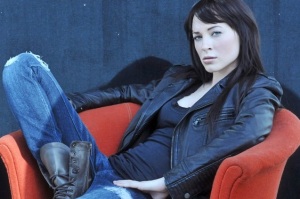 gJg: What was it like working with such amazing actors?

MP: It was fantastic. First, to be working alongside of Bill Moseley was fantastic. I learned so much from him. Lucinda Jenney (Lea) I remembered from “Crazy Beautiful” and absolutely loved her. She and Bill are a couple in real-life and having them together for this film just added a unique dynamic to the project.

Chris Coy (Andrew) is so talented. I just adore him. Then of course there was Michael as the cop. He is such a great actor. We really were blessed with a great cast and crew.

gJg: What was it like working with director Jourdan McClure?

MP: Jourdan was awesome! He’s just a natural. He knew exactly what he wanted and was just so laid back. “Rogue River” is actually Jourdan’s first feature-length film and there’s something so special about that. He was just so passionate and really wanted to make it the best movie it could be. He really put everything into it and it worked.

gJg: The cinematography in this movie is absolutely incredible. The Oregon scenery is breath-taking.

MP: It really is. Brian Hamm was our cinematographer. He also worked with me on “Sensored” as well and is such a genius. It looks creepy and beautiful at the same time.

gJg: One of reasons I loved you in this role was the way you could just turn on the tears. Can you do that on cue?

MP: <laughs> Yeah. It was all real. People always ask me if they’re fake tears. I’m known to be a good crier and in this role you sort of had to be. Mara was just so tortured. It called for it.

gJg: Were there any funny stories from the set you can remember?

MP: Yes! We had these wild turkeys roaming around in the woods and every time I would scream and cry the turkeys would respond in unison. <laughs>

So, here you’d have a scene filled with all of this drama and tears and then all of a sudden you’d hear: “Gobble! Gobble! Gobble!” <laughs>

Then there was also the scene where I actually got hit in the head and got a concussion.

When we were filming the commentary for the DVD it was hard for me to watch it again. <laughs>.  My heart started racing and I suddenly remembered how badly it hurt.

gJg: What do you like most about the movie?

MP: I really love the scene where Bill and I meet down by the river. It sets the tone of the film really nicely. I love it because Bill’s just so charming and instantly connects with me. I thought it was shot beautifully.

gJg: What projects do you have coming up?

MP: I actually have another horror film project written by Todd Langseth coming into fruition called “Stingy Jack”. Bill is also attached to that project as well as Michael Berryman (“The Hills Have Eyes”). I’m really excited about it.

I also have another film I did called “The Party is Over” with Kathy Baker from “Picket Fences”. That one should be coming out soon.

gJg: What do you like to do when you’re not acting?

MP: I love traveling and photography. I’m also a bit of a book nerd. I really love escaping in books. I’ll read pretty much anything and everything. It’s even gotten to the point where I’ve told myself I have to stop going to Barnes and Noble <laughs>

gJg: Tell me about how you first got into acting.

MP: Growing up, my parents used to take my brother and me to the theater all the time. I think that’s what created this great love of the arts for me.

When I was four I went to one of the top children’s theaters in Fort Worth and sat in the front row to watch “Miracle on 34th Street”. I still remember at that moment telling my Mom that this was what I wanted to do with my life. She told I’d have to wait a few years and then she would put me into classes.

So a few years later I started taking classes at that very same theater and coincidentally, they decided to remake “Miracle on 34th Street” again only this time I was cast as the lead (Susan Walker) and got to perform for over 20,000 people!

gJg: Where did you go from there?

MP: I continued to work for years doing theater in the local area and then started getting into commercials. An agent eventually saw my work when I was 15 and I was off to LA.  I’ve been here ever since and it’s been absolutely great!

gJg: In addition to your movie roles you’ve actually done quite a bit television work as well including a recent episode of “CSI: New York”.

MP: Yes! It originally aired in October. That was a fantastic experience. And what’s interesting about that particular show is that Adam Targum, who produced “Rogue River” also wrote and produced that episode of “CSI: New York”.

I’ve worked with Adam three times now and just adore him. Gary Sinese is another amazing actor. I loved working with him too. He is the nicest guy.

gJg: What do you find are the differences between filming for a movie as opposed to television?

MP: TV works much faster. You’re on a tight schedule. A drama might take eight days of shooting. You have to get everything done and it moves very quickly.

For a film, you have the luxury of having a bit more time to work with the character and develop it. That’s the difference but I love to do both!

If her past work is any indication, the future looks extremely bright for Michelle Page!

Article first published as A Conversation With Actress Michelle Page on Technorati.