Today is my last day in the Pacific Northwest and truth be told although I’m excited to see the Seattle Seahawks play today ( the main reason I made the 2,500 mile three time zone trek), I am also missing home.

I’ve spent most of the past few days exploring the Emerald City and catching up with some old friends. I made a promise to myself to do two mandatory things on this trip in an effort to save money: not rent a car and stay in a hostel. Once the plane landed I was able to make good on the first promise. I bypassed the car rental counters and passed through the garage to the Light Link Rail.

There is a new train line that takes you from the SeaTac airport to pretty much anywhere you want to go in Seattle. For $2.75 a trip you just can’t beat it. I quickly hopped aboard with my backpack and made my way to University Street.

I then walked the last few blocks to Pike Place and checked in at The Green Tortoise Hostel (which is directly across from the world-famous market).

Hostels are quaint, little rooms with little more than a common area, a bunch of bunk beds in each room and a bathroom. I thought of it as a college dormitory. Since I planned to explore the sights most of my stay and not be stuck in the room watching HBO or uh, some of those “other channels” it sure beat paying four times the price for a room in a hotel. Ironically, some of my roomies turned out to be from Canada and were also in town for the game so it worked out ok.

Since the sun was shining upon my arrival, I quickly made my way to the Space Needle and took the ride 605 feet to the top where I admired the panoramic view of the downtown region and beyond. The weather in the distance was a tad bit cloudy but I was still able to make out Mount Rainier off in the distance.

Someone once told me that on the clearest of days in addition to the wonderful views of the Rainier volcano you can also see Alaska and Canada. (I got a Sarah Palin sort of chuckle out of that comment).

I also wandered around Pioneer Square, perused the freshness of Pike Place Market (yes, I saw them throw the fish) and drank enough Starbucks and Tully’s to last a lifetime.

The Seattle waterfront really is a sight to behold. From pretty much any vantage point you can see the Cascade mountains on the horizon. I watched the sun set beyond the range and heard the roar of the traffic on the highway as people busily get to wherever people need to get to be. I took in a deep breath and wondered how with all of this hustle and bustle, people could possibly just drive on and ignore something so beautiful? Stop and smell the roses couldn’t be any more truer than now. 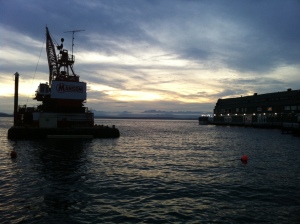 Yesterday I took a bus to nearby Tacoma to visit a friend I hadn’t seen in a few years. Skies were gray and as the bus rolled along I-5  I watched the rain droplets roll down my window. At that point I realized that maybe I was now officially experiencing the Seattle everyone was telling me about.

And I love it.