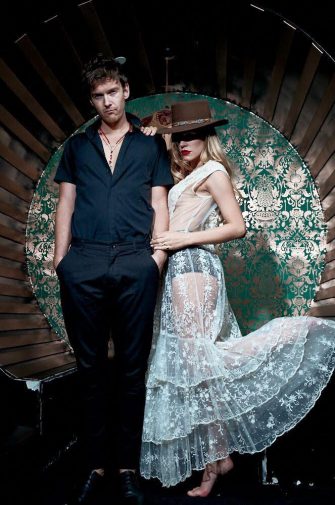 Pour Vous, the duo of actress Christa B. Allen (ABC’s “Revenge, “13 Going on 30”) and producer Johnny What (Bråves) describe their music as dark, sexy and subversively naughty. Perhaps nothing confirms this more than their sensual new single and NSFW video, “Scorpio”.

The infectiousness of Allen’s hauntingly ethereal vocal, combined with a tight production that includes religious elements and lurid images of sex, rebellion and taboo, leaves nothing to the imagination. The result is a stunningly beautiful, and often uncomfortable, look at personal introspection and female empowerment.

AXS recently spoke with Christa Allen and Johnny What about “Scorpio”, Pour Vous and more in this exclusive new interview.

Christa Allen: “Scorpio” was the first song Johnny and I wrote together. It wasn’t that we intentionally tried to write a song on this subject matter. It just seemed natural to write about sex, love and two people in a relationship.

Johnny What: Christa and I both love sexy music. We discussed a little of what we wanted to talk about, and “Scorpio” was the beginning of that. We had a lot of fun with the lyrics and trying to figure out as many ways to say, “f#ck me good”, as possible. [laughs].

AXS: Where did the idea for the video originate?

JW: The idea of having someone on a cross receiving oral sex was one I’d had for a while. When I brought the idea to Christa, she suggested we make the cross out of televisions with images of powerful women or sexual revolutionaries behind her. It was a timely idea.

Click here to watch the NSFW video for “Scorpio”.

AXS: Christa, did you have any reservations about doing the video? There’s very little left to the imagination.

CA: I had no reservations because I strongly believe in the concept and was excited about executing it in the best possible way. There are so many different meanings you can take away from the video. It brings out whatever speaks to you. For me, an interesting element was being crucified on a cross made of televisions. It spoke to my history of being on TV for the past sixteen years. I also come from a very conservative family that doesn’t believe in females wanting sex for pleasure. For them, sex should be for procreation only and having babies. Women shouldn’t be ashamed of their sexuality, and I couldn’t be more excited about putting that message into the world.

Interview with Christa Allen & Johnny What by
Clicking Here

Dark, sexy and subversively naughty are just some of the words that describe the musical collaboration between actress Christa B. Allen (ABC’s “Revenge”, “13 Going on 30”) and songwriter, producer Johnny What (Bråves). A project appropriately called, Pour Vous.

Allen’s hauntingly ethereal vocals on the duo’s first single, “The Flood” bring us a personal introspection of the love and emotion within their relationship. The structurally sound, groove-ridden track is the first song in what promises to be a busy year of music for Pour Vous.

AXS recently spoke with Christa B. Allen and Johnny What about the new single and more in this exclusive interview.

AXS: How did the song, “The Flood” originate?

Christa Allen: The beginning of a relationship is always the honeymoon phase where everything’s perfect, but this was a song written after we’d had our first little “lover’s quarrel.” It was written out of that first jolt of fear you get when you fight with someone and then say to yourself, “Why is this happening? This is supposed to be perfect.”

Johnny What: It was one of the more memorable songwriting experiences I’ve had because I was writing a song about the possibility of breaking up with the person I love the most. It was a bit confusing and intense but Christa put me at ease. I’m thankful for the experience because it helped me to grow. Not only as a songwriter but also as a person.

CA: Johnny has a very specific process for songwriting. It’s a formula that consists of specifically choosing chords, picking melodies and then writing lyrics to pull it all together. The actual content –the lyrics–usually comes as you work on the song. Certain words just seem to fit perfectly into the melodies that you choose.

JW: For me, the melody always chooses the lyric. I never limit myself by trying to force a concept into a melody. I prefer to have a melody find the words that sound best with the notes and then writing it from there.

AXS: Do you have plans to release more music and do live shows?

JW: Yes. We’ll be doing a single-based strategy of releasing songs and will be putting out another single soon.

CA: As far as live dates go, we’re going to take the temperature and see how people respond to the music, which so far has been overwhelmingly positive. It feels really good. We’d also like to release a few more singles before playing live, so people have something to sing along to.