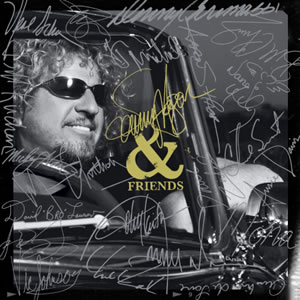 There’s only one way to celebrate 40 years of rock, and that’s with your friends.

With contributions from Joe Satriani, Neal Schon, Nancy Wilson and Michael Anthony (among others), Hagar not only looks back on his solo career, but also his time with Montrose, Van Halen and current bands the Waboritas and Chickenfoot. The new album also gives fans a taste of what the future might hold for Hagar.

I recently spoke with Hagar about the new album and got his thoughts on Van Halen, Chickenfoot and some of his best memories from four decades in rock.

John Carter [Hagar’s manager who died in 2011] had a dream of getting me to do a “four decades of rock” record and tour. The idea was to do something from the Montrose, early Sammy, Van Halen and Geffen years and write a new song from each of those eras. Write a Montrose-type song, a “cars” song from the Red Rocker era, a Van Halen/Chickenfoot-esque-type song and a lifestyle song.

Read the rest of my Guitar World Interview with Sammy Hagar by Clicking Here!