It was a hot summer night almost thirty years ago when my neighbors drug my brother and I to the movies to see the third installment of the Rocky Balboa franchise. Not that we went kicking and screaming mind you. Any opportunity for teenage boys to get out of the house was most welcome. No, it’s just that we would have much preferred to see “Poltergeist” or better still, sneak into see the R-rated “Fast Times At Ridgemont High”. Looking back now though I’m glad we chose to consume large quantities of popcorn and Coke with Sly Stallone instead of Jeff Spicoli.

Rocky III was the film that first introduced me to Mr. T, the mo-hawked muscle man who would go on to pity fools for the remainder of the 1980’s and beyond. But Rocky III also introduced me to something else: something even more powerful than Mr. T’s gold chains or feathered earrings. It was also the film where I first heard the now infamous guitar riff for a song from a band that would change my life: Eye Of The Tiger by Survivor.

Written by Frankie Sullivan and Jim Peterik and sung by Dave Bickler (who would later achieve great fame as the singer on the Real Men Of Genius Bud Lite commercials), the theme from Rocky III is still as popular as ever three decades later. Along with winning a Grammy the song was also nominated for an Academy Award, became the #1 song of 1982, has to date over 2.5 million downloads on iTunes and ranks as the #3 best song to workout to according to Men’s Health magazine.

The band would strike Rocky gold again a few years later when the song “Burning Heart” was released as part of the Rocky IV soundtrack. Although this song didn’t fare quite as well as Tiger, the music from Survivor continues to be both inspirational and motivating to me. As you’ll soon discover, the seed planted with Eye of the Tiger would not only begin my admiration for the band but would ultimately become the spark that would fuel my life and music for years to come.

When I first started playing guitar in 1984 a new Survivor album was already making its way up the charts. Vital Signs was the first album to feature new singer Jimi Jamison on vocals and was the very first record I ever purchased. (Jamison would later go on to sing the infamous theme from the television show Baywatch). Songs like “I Can’t Hold Back“, “High on You” and “The Search is Over” were getting tremendous airplay on both radio and the early days of  MTV(back when they used to play music videos). These were songs with melodies and lyrics that really spoke to me. Words of encouragement in my love less adolescent youth. Songs I wanted to learn how to play.

So while most other aspiring guitarists were locked away in lesson rooms with their guitar teachers learning Van-Halen and Def Leppard solos I was dragging my butt in with a menacing jet black Gibson Explorer asking my teacher to show me how to play “I See You In Everyone“, the final song on the Vital Signs album, note for note.

Now that I think about it I can still recall the puzzled look on my teacher’s face when I brought the album to lesson for the first time. And I can still picture him saying: “What, no RUSH?….No AC/DC?…No Bon Jovi?” and I’d just smile and think to myself, “Nope, even better!” For how could I possibly tell a man who grew up watching artists like The Rolling Stones and Led Zeppelin that the absolute best concert I ever saw in my life was Survivor and REO Speedwagon in 1985? But it was, and quite frankly still is, true. 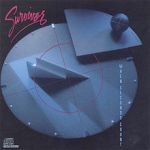 By 1986 my longing for a new Survivor record was finally appeased. When Seconds Count was released and immediately consumed me. Songs like “How Much Love” and “Rebel Son” inspired a then seventeen year old boy to reach higher and the ballad “Man Against The World” made me want to track down keyboardist Jim Peterik himself and make him show me how to play its beautiful melody. By this point I think most of my friends knew that my whole Eye of The Tiger/Survivor phase wasn’t just a passing fad. In fact, one of my best memories of graduating high school was the post grad party my parents held where me and a bunch of other musician friends all set up our gear and played half of the Vital Signs record.

It wasn’t long before college came calling and once again Survivor was there with me. This time with 1988’s Too Hot To Sleep. I can’t begin to tell you how many trips across the miles of campus I made with “Didn’t Know it Was Love” and “Desperate Dreams” blaring on my Sony Walkman. Although the band themselves consider this to be their best album the fact that it didn’t achieve big commercial success didn’t bother me one bit. For me, much like them, it’s always been about the music and this one delivered the goods.

Once college life was over the job of real “work” began. While playing my part in the 9-5 crowd over the years I’d keep myself busy in the musical groove by writing and performing in various bands. All the while I’d find myself writing songs that were influenced by the amazing songs from those Survivor records. Unfortunately it would be quite a while before I would hear any new music from the band other than from compilation albums. Unless of course you count that hilarious Starbucks commercial.

Finally in 2006 a brand new album, Reach was released and listening to the first song and title track was a much welcomed slap in the face. The blaring guitars and drums told me that at long last the Tiger was back. I immediately proclaimed, to myself anyway, that this song should be the one they start every show with. This record not only featured guitarist Frankie Sullivan singing lead on few tracks but also contains the song “Fire Makes Steel”, yet another inspirational anthem which, go figure, was almost and should have been included in the film “Rocky Balboa”.

As you can see, I’m a huge fan of this band. I also know that the band has gone through several line-up changes over the years. Different singers, bass players and drummers have come and gone. There’s no need for me to know all the reasons why. I can personally attest to there being drama in every band so line-up changes are not at all that surprising. But it was unfortunate that Jimi Jamison, the voice that became synonymous with Survivor for me had left the group shortly after this record was released. Robin McAuley, most known for his work with McAuley Schenker Group would take over on lead vocals for subsequent tours over the next few years.

Flash forward to 2012: A surprise announcement was made that Jimi Jamison, who had released several well received solo albums since his departure five years ago, would once again be rejoining Survivor for a new album and tour. Having suffered for years listening to robotic voices and synthesized loops in what’s being peddled as “music” these days my prayers for real new music and songwriting from my favorite band is about to come true once again! To say that I’m excited is an understatement.

Ironically enough, it all seems to have come full circle for me. This “new” Survivor is going to happen nearly thirty years to the day since I first heard that guitar riff in the darkened movie theater. The summer night that changed everything for me. And the message of the song couldn’t be more true today: