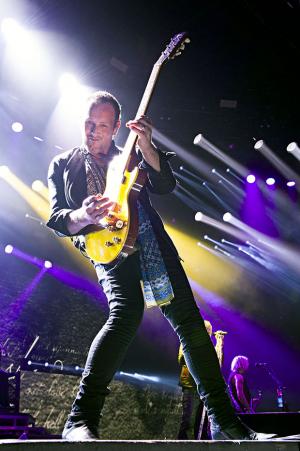 We recently caught up with Vivian Campbell, who was eager to discuss Def Leppard’s new self-titled album and his more recent project, Last in Line, which reunites the veteran guitarist with his fellow Dio bandmates Vinny Appice and Jimmy Bain. Their new album, Heavy Crown, is set for a February 2016 release.

You can check out the complete interview below.

The first thing we did was to write, record and play live in the studio, which was something we hadn’t done since ’96 and the Slang album. The one thing I think really unifies all of the songs is the Def Leppard vocals. It makes us who we are. Although it’s stylistically a very diverse record, it also undeniably sounds like the band. That’s why we ended up calling it Def Leppard.

What’s the writing process like for Def Leppard? Does it begin with a melody, a riff, a hook?

All of the above. Sometimes, someone will come in with a completed song or someone might just have an idea and we’ll all talk about it. A lot of times on this record, we started off with a conceptual idea or an emotion, and a song was written to fulfill that notion.

What can you tell me about the track “Dangerous”?

Phil had a musical idea for that song and worked up a demo for it. It’s flashy and punky with a very immediate chorus. It’s very reminiscent of “Photograph” in a way, and it’s one of the catchiest songs on the album.

How about “We Belong”?

That’s a Joe [Elliott] song and one of my favorite songs on the record. Joe had that written just as we started working on the record. He also had a concept that the song would feature all of us individually taking turns on lead vocals. We’re known for our collective, group vocals and it was nice way to showcase us as individuals. That was a first for the band.

With Vivian Campbell by Clicking Here!