Author Andrew Golub is not your typical Duran Duran fan. Over the course of three decades, the Pacific northwest native has amassed a rather impressive arsenal of band memorabilia. It’s a collection that includes everything from rare articles and artifacts to carefully restored posters and prints that document every chapter of Duran Duran history. Selections from Golub’s archive have already been showcased in the Rock & Roll Hall of Fame and Museum as well in an A&E Biography, two film documentaries and several public exhibitions.

Golub’s 260-page book, “Beautiful Colors: The Posters of Duran Duran” presents an interesting perspective of the band’s career as well as his own fandom. Through the use of full-color posters from 1978 to the present, Beautiful Colors documents the band’s evolution through vintage artwork and stunning photography by Christine Born.

The book has received overwhelming praise from members of the fan community as well as from Duran Duran themselves, with keyboardist Nick Rhodes contributing a touching forward. Beautiful Colors is a book for any fan of Duran Duran or those with a penchant for 80’s nostalgia. Moreover, the book is a true testament to the power of music.

I spoke with Golub about the book and his fascination of all things Duran Duran. 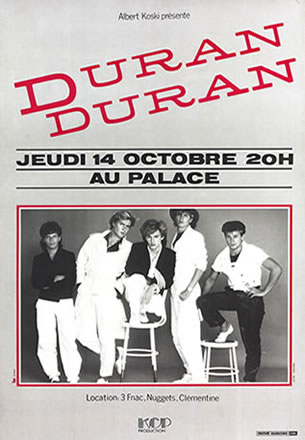 What was your primary motivation behind the Beautiful Colors book?

A book was always a possibility given the breadth of my collection and I’ve received many gentle urgings to produce something like this from friends and fans over the years. From exhibitions to my website, I strived to make my collection more accessible to the global fan community as well as the band. Due to their sheer size, posters tend to be the most dramatic category in the archive and the type of memorabilia I feel most proud of. So the concept behind Beautiful Colors felt like a natural decision.

How did you determine which pieces to include?

Since the collection is bursting with treasures, selecting posters for inclusion was a challenge. But once I decided to focus only on official promotional posters (from record companies, concert venues, etc), the choices became clear. Posters are designed to capture attention and ignite the imagination. They represent memories and milestones, for the band as well as the fans. I feel as if I’m working to preserve history through a medium that would otherwise be lost in time. My book may commemorate Duran Duran’s history, but the memories on each page belong to fans around the world.

When did your love of Duran Duran begin?

The first strains of Fab Five Fever nestled into my DNA when I was 13 – the later part of 1984. The combination of charismatic photo sessions, captivating videos, and spectacular, memorable music was all it took to activate my inner Duranimal. My days were soon filled with trips to supermarket magazine racks, brainstorming on how to fund purchases of DD material and of course, taking good care of the items in my growing collection. Hard to believe there was a point when my whole collection fit inside my bedroom. A fortunate thing since my mother refused to build an annex on to the house for memorabilia maintenance [laughs].

What was it about their music that really interested you?

Nick’s soaring keyboard arrangements against Roger’s rock-solid beat, John’s velvety funk-infused bass, Andy’s electrifying guitar licks, and Simon’s lush, wonderfully cryptic lyrics. Every song offered something fresh and exciting with each new listen. “Seven and The Ragged Tiger” was my first album, launching a full, swift occupation of my senses. The synthesized rapture of “The Reflex” captured my imagination first, followed by the harmonized bliss of “New Moon on Monday,” and the rest of the record overwhelmed with awesome. I found Duran Duran’s music stayed with me long after I stopped listening, and I felt myself yearning for more—discovering other albums, learning about the members, and essentially assembling a portrait of the artists behind my favorite tunes. The music was my gateway drug.

What made you decide to start collecting pieces of Duran Duran memorabilia?

Being attracted to Duran Duran’s strong visual style, acquiring memorabilia seemed like a natural direction. Photos offered glossy, handsome images and magazine articles were often accompanied by fan-friendly, full-page pin-ups. But posters took Duran Duran’s exciting, photogenic persona to an even higher plane. While I’ve enjoyed filling out the archive with many odd and fascinating artifacts, the posters have always been the heart of my collection and the clearest visual representation of Duran Duran’s professional history.

How do you acquire pieces for your collection?

Much of my effort revolves around careful networking, reaching out to those within the concert promotion industry and building credibility with my archive. The biggest challenge comes with every new tour, when the whole world becomes a potential harbor for poster production. That is also when I become most aware and appreciative of all the wonderful friends and fellow fans keeping me in mind across the globe!

Do you have a particular favorite?

Without picking a single, most prized item, I would highlight the posters I’ve been able to find from the band’s earliest chapters. Whether testing new material in Birmingham clubs, cutting their teeth as a support act or exploring their New Romantic roots, Duran Duran’s formative years remain the most elusive to document through posters. I have moments of quiet incredulity and deep pride when I look at the first chapter of my book, populated with more posters than I ever expected to include.

Have you ever gotten to meet the band?

I have met the band on several occasions and each encounter has been intensely meaningful and ingrained as a life highlight. Every time I am fortunate enough to meet Duran Duran I am reminded of why I do what I do, why the band deserve nothing less than absolute lifelong celebration and I walk away with renewed commitment to my archival work.

I was introduced to Duran’s sound through the Ragged Tiger album, particularly “The Reflex”. That record and single will always occupy a premium spot for me. However, Rio is bursting with some of my biggest faves. Especially “Lonely In Your Nightmare”, “Save A Prayer” and “Hold Back The Rain”. Timeless classics which never fail to elevate my heart rate, tap my emotions, and transport me to a very happy place. In the band’s recent years, All You Need Is Now is nothing short of crazy-awesome, having re-captured the same visceral, joyous feel that got me hooked in the first place! “Runway Runaway”, “Blame The Machines” and the title track are pure brilliance that I enjoy down to the molecular level.

What has the band had to say about your book?

The band has been incredibly supportive through Twitter and Facebook, and after a recent trip to present the book to Duran’s management in New York I learned the band assessed Beautiful Colors as “magnificent.” It was important to create something that both the band and the fans could be proud of. In addition to charting the band’s history, I set out to honor the bond between the band and their faithful following as well as my own connections within the global fan community. This passion is a powerful common thread we all share, and I feel blessed to be part of something so special, enduring and so much bigger than myself.

For more information on Andrew Golub and
Beautiful Colors: The Posters of Duran Duran Click Here!

To See Golub’s portion of an American Collector’s documentary
(38 minutes in): Click Here