This year, I had the pleasure of interviewing one of my favorite guitarists Greg Howe about his new project Maragold.

Greg grew up in my hometown of Easton, PA and cut his teeth in many of the same clubs I performed at, so having that connection and getting to speak with him about it was especially cool.

Maragold also features the killer vocals of powerhouse Meghan Krauss, someone else I had the opportunity to speak with. Meghan is the real deal with a voice that Howe himself has often compared to a distortion pedal that she can activate at will. A prophetic metaphor that accurately describes the blonde beauty.

Maragold has just release a new video from their debut album. Check out the song, Paradigm Tsunami:

Greg and the band have been nominated to perform at this year’s Grammy Gig of a Lifetime Concert event. A voting competition where the winner will play in Los Angeles at Club Nokia and open for The Neighbourhood! Let’s help them get there!

You can vote every day and it’s super easy to do:

For more information on Maragold be sure to check out their official website by Clicking Here.

When guitarist Greg Howe was interviewed last year about his new vocal project Maragold, he gave a few details about the band he was assembling. Included in the line-up would be longtime bassist Kevin Vecchione as well as drummer Gianluca Palmieri. But Howe stopped short of revealing the name of the singer he had in mind; wanting instead to wait until he was absolutely sure everything was going to work out.

Rather than divulge the name, all Howe would say was that the new singer was going to be a male. That’s when the interviewer said, “Knowing you Greg, it’s probably going to wind up being a six-foot tall viking girl who sings like a dude.”

So maybe it was prophecy that brought vocalist Meghan Krauss on board, but one thing’s for sure: listening to Maragold’s debut album reveals that not only does Krauss fit the visual image, she also brings a bluesy vocal style and charm to music already reminiscent of the great rock radio sound of the 70’s, but with a modern, 21st century twist.

Classically trained and having paid her dues on the club circuit, Krauss is a vocal powerhouse who’s star is just beginning to shine. Howe himself has compared Krauss’ voice to a distortion pedal that she can activate at will. Another prophetic metaphor that accurately describes the blonde beauty.

I sat down with Krauss to discuss the Maragold project as well as her time growing up, and how the challenges of the unexpected are what she’s looking forward to the most. 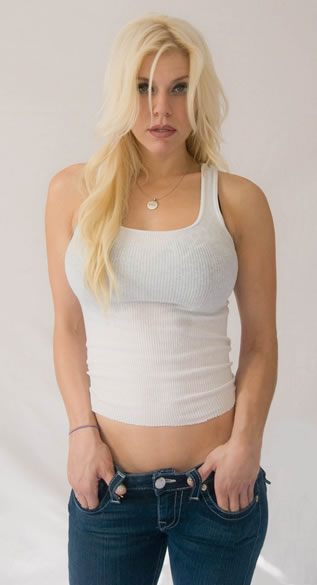 Tell me how you got involved in the Maragold project.

I was playing out on the scene in the northeastern part of the country. Musically, there’s a lot going on there. Kevin [Vecchione] was also playing in the area and he and I became friends. Sometimes, I’d sit in with his band when they’d be playing, or he’d sometimes play with me a few times in bands that I was performing in.

One day, he called and asked me how I’d feel about changing my life and doing something completely different. He told me about the project and I was immediately on board. Greg is such an incredible musician and Kevin is one of my favorite people on the planet. It was an easy decision to make.

What’s it like working with Greg, Kevin and Gianluca?

It’s literally just one laugh after the next! The four of us together are out of control. [laughs]

What was the recording process like for the album?

When they initially asked me to come in on the project, they already had a lot of material written. The first time I actually met Greg was my first day in the studio, so it was a little unnerving; just knowing who Greg is and what his credentials are. But Greg and Kevin are so laid back, and that made it easy for me to just come in and have fun. When I got into the  studio no one was really sure what to expect, but we all really connected and were able to put our own flair to the songs. We were tracking a song a day and it was super smooth.

Do you have a personal favorite track?

Every day I have a different favorite. Initially, it was “Evergreen” because it was one of the first songs I recorded in the studio and I love the groove and melody. I also love “Lullaby”. It’s super haunting to me. Then there’s “Oracle”. The songs are just so easy for people to connect with. I really love them all!

Are you making plans to tour?

We’re working on some things right now and deciding what direction we want to go, but we’re definitely going to tour. Doing studio stuff is awesome, but there’s nothing like playing for an audience and connecting with them. As a musician, that energy can’t be replaced. We’re dying to get on the road.

Let’s talk about your singing background.

I began taking choir classes when was in middle school. At the time, I also remember wanting to take vocal lessons, but my Step Dad kind of thought that anything that’s not classical is country (and he’s not a fan of country) [laughs]. He was willing to help me with vocal lessons, but they had to be classical. So I started taking classical lessons first; including opera, which was very hard-core. I did that all the way into college. I was influenced by a lot of other genres along the way, but that’s how I really got started.

Did being classically trained help you vocally for what you’re doing now?

Definitely. Even just the simple things like breath support and getting to know your voice. It was really helpful and influenced the way I sing today.

Did you always want to be a singer?

I lived in LA for a period of time wanting to be a singer, but became disenchanted being out there. After a  few years, I moved to Ireland for a while and when I came back, I settled down on the East Coast wanting to go to medical school. That’s really where I thought I was going to end up. I remember I was singing at a karaoke bar one night and met someone there who introduced me to the cover band scene [which is much more lucrative than on the West Coast]. I decided to defer from going to school and the rest is history. I began playing out consistently and eventually met Kevin who got me into this project.

Who are some of your influences?

I grew up in the era of Mariah Carey and Whitney Houston. I also love Sass Jordan, Aretha Franklin and Luther Vandross. Anyone who has a soulful thing to their voice I was always gravitated to.

What are you most looking forward to with the Maragold project?

Getting to play with the guys and doing what I love to do. I’m really excited that I don’t know what to expect. Every day is a gift, and I’m pumped to just embrace it.