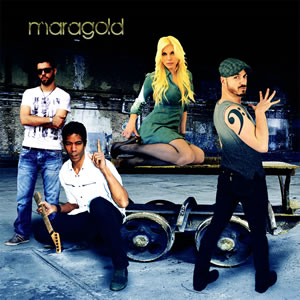 This year, I had the pleasure of interviewing one of my favorite guitarists Greg Howe about his new project Maragold.

Greg grew up in my hometown of Easton, PA and cut his teeth in many of the same clubs I performed at, so having that connection and getting to speak with him about it was especially cool.

Maragold also features the killer vocals of powerhouse Meghan Krauss, someone else I had the opportunity to speak with. Meghan is the real deal with a voice that Howe himself has often compared to a distortion pedal that she can activate at will. A prophetic metaphor that accurately describes the blonde beauty.

Maragold has just release a new video from their debut album. Check out the song, Paradigm Tsunami:

Greg and the band have been nominated to perform at this year’s Grammy Gig of a Lifetime Concert event. A voting competition where the winner will play in Los Angeles at Club Nokia and open for The Neighbourhood! Let’s help them get there!

You can vote every day and it’s super easy to do:

For more information on Maragold be sure to check out their official website by Clicking Here.