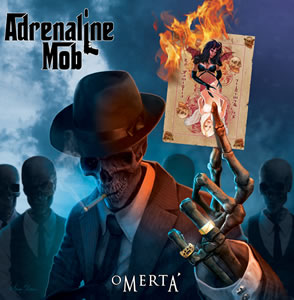 What happens when you take elements of Dream Theatre, Symphony-X and Disturbed, throw them all into a blender and then add the blazing guitar of a true genius of his instrument?

You get: Adrenaline Mob.

Fans who may have missed out before will be pleased to discover that four of the songs from that record also appear on the band’s soon to be released full-length album, Omertà.

Produced by the Mob themselves and mixed by Jay Ruston, well-known for his work with Anthrax and Steel Panther, Omertà disproves the old adage that metal albums are made to just melt faces (although, let’s face it, there’s nothing wrong with that). The truth is though, it’s always been the songwriting and the sound that matters most and on both counts Omertà delivers the goods.

From the first few bars of the in your face intro of “Undaunted” I found myself once again asking the question: “How the hell do these guys sound so damn good?” It’s inhuman. They make it look so easy. And the best part of it all is: it’s actually THEM playing and singing. Not just another studio trick that record companies have been spoon-feeding the masses for years.

I mean lets face it, these guys are real musicians. Ones who have spent years honing their craft. Musicians similar to the greats I idolized growing up and ones who will now carry the torch on to the next generation of metal heads.

In addition to the songs from the original EP, here are a few more highlights from Omertà:

Indifferent is a song about self-reflection. One that is radio ready and a song that I can already picture blaring from my car speakers on hot summer nights.

I never thought you’d hear me say, “I’m better now, so I don’t need your sympathy.”

All On The Line nicely mixes things up with Russell Allen’s crisp vocals and an acoustic guitar intro delivering the message before kicking things back up.

I don’t wanna wake up and make the same mistakes.
It happens to me all the time.

For the metal head purists, the groove on Feelin’ Me is infectious and will keep your fists pumping for a long time.

One of the real gems on Omertà is the band’s version of the song Come Undone. That’s right, you read that correctly: a Duran Duran cover!  Something die-hard metal fans might consider “blasphemy” but in reality is actually just another example of how music has universal appeal. The song also features a guest vocal performance by Lzzy Hale of Halestorm – Genius!

Omertà is the next chapter in the story of Adrenaline Mob and coincidentally ends with the blazing song Freight Train, a cacophony of guitars and drums complete with real engine sounds.

Which makes me so glad I’m along for the ride.

For more information on Adrenaline Mob check out: www.adrenalinemob.com

August 14th, 2011. I’ve written it down because it’s not often you are privy to the beginning of music history.

You see, I wasn’t even a twinkle in my father’s eye when The Beatles were an up and coming act. And I was just a child and never got to see when guitar greats Jimi Hendrix, Eddie Van-Halen and Randy Rhoads began and all took it up a notch.

Alas, I was starting to feel that being part of the beginning of something special just wasn’t in the cards for me. Last night though, I finally got that chance when I saw the very first Adrenaline Mob performance in Allentown, Pennsylvania. 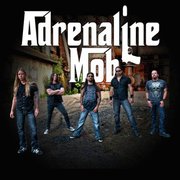 Having never seen an arsenal of musicians of this caliber come together before I didn’t quite know what to expect. But as the band took the stage to the familiar sounds from The Godfather movie and tore into Psychosane, the first song from its debut self-titled EP, any doubt I had as to whether or not they could pull it off was gone.

It truly was a headbangers paradise as the band wooed the audience with songs like Hit The Wall, Believe Me and the Black Sabbath/Dio classic (and very appropriate) Mob Rules.

Mixing in a few songs from their soon to be released full length album, Russell Allen told the audience “This next one’s our ballad” and I found myself wondering if this would be just another gratuitous throw away song. I was pleasantly surprised to find that their “ballad’ was actually on par with all of the other songs and Mr. Allen’s vocals were both smooth and powerful.

I felt like part of a brotherhood listening to Paul DiLeo’s killer bass grooves and sonic euphoria while shaking his head along with the rest of us.

I’ve never seen Mike Orlando perform before and as a guitarist myself I stood there in awe as I watched him shred. He is one of the most phenomenal players around and makes it look so easy. Afterwards I asked him how long he had been playing and he told me “About a week”.  Very down to Earth guy. What I should have asked him was if he was available next week to give me lessons.

Rich Ward played to the crowd showcasing his amazing talent and at one point allowing members of  the audience to play his guitar while he held it over them.  I wished I was down front so I could have also been a member of The Mob for just one night.

As for Mr. Portnoy, well what can be said that hasn’t already? The man is a genius, one of the greatest drummers ever and also one of the nicest guys you’ll ever meet. Just a year out of leaving the mega band Dream Theater, Mike is back with a vengeance.

After a thrilling 75 minute performance, the band exited the stage once again to The Godfather theme along with intentional feedback from Mr. Ward’s guitar.  Indeed, there was no better way to end the beginning.

If you haven’t done so already, I highly recommend picking up a copy of the Adrenaline Mob EP and seeing this band on their current tour so one day, like me, you’ll be able to say: “I was there when it all began”.