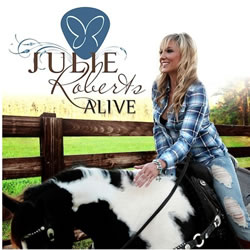 It was a half-dozen or so summers ago when I first met Julie Roberts. It was at a country music show in Reinholds, Pennsylvania and she was in the middle of a whirlwind tour supporting her self-titled debut album on Mercury Records.

Julie was riding high on the success of her mammoth hit “Break Down Here” when she pulled into the little Pennsylvania fair and I was fortunate enough to be part of the local band that performed as her opening act that night.

On this night, I had the opportunity to meet Julie backstage prior to showtime and exchange the usual pleasantries opening acts typically do with the headliner. You know, signing memorabilia, taking pictures and that sort of thing.

Already a huge fan of her music I remember that when our set was over I was standing alone backstage and watched as Julie was introduced and walked out onto the stage. A surreal moment for me to say the least.

The thing I’ve always loved most about Julie is her soulful voice. She sings with such emotion that its hard not to fall in love with it. It’s infectious. When she closes her eyes and starts to sing you don’t just hear the words but rather, you “feel” them.

After the show, I remember seeing Julie and her Mama manning the merchandise booth and meeting anyone and everyone who came up. It didn’t matter how long it took, she was going to stay and greet everyone who came to see her. And I always wished more artists would have that personal connection with their fans.

The years following that little Pennsylvania show weren’t easy for Julie. Although she would release a critically acclaimed follow-up record, “Men and Mascara” she soon found herself sidelined when she was diagnosed with multiple sclerosis.

To make matters worse, she was also released from her record contract with Mercury, Nashville and became a victim of the Nashville flooding that occurred in May of 2010.

But even in the face of all of this adversity she never lost faith. Julie still managed to do something that most other artists in her position wouldn’t have…. she pushed on. And the result of which is a record she can honestly call her own.

You make me feel so Alive.

Alive is the third album from Julie Roberts and has to be her most personal. Not only is Julie the artist and one of the principal songwriters on this record but she has also taken on the responsibility of many other aspects of the record as well including CD creation, marketing and distribution.

From the cover design on the CD right down to the little UPC labels that adorn them, she’s had her hand in everything. And where as most other bands and artists have the luxury of a record company for promotion and distribution, Julie personally fills all orders for her independently released album and mails them out.

Whether it’s the jazziness of “Let’s Fight“, the beautiful piano in “Carolina From My Soul” or the good time of “NASCAR Party” this record showcases everything I love about Julie and really delivers the goods. Country, Blues, Jazz  – it’s all here.

Alive is filled with the same soulful voice that I loved way back in Reinholds. One listen to “Whiskey and You” is all you need to feel that same connection.

That’s the difference between whiskey and you.

Julie Roberts is the epitome of what a true artist should be. She loves her faith, her family and her fans. She’s involved in every aspect of her music. From songwriting to recording to taking autographed CDs to the post office. She does it all. Not to mention the fact that she has a certified gold record in her arsenal and has also performed on some of the biggest stages in country music.

She’s back! She’s Alive – and I couldn’t be happier.