“Good morning. This is US Airways calling to let you know that there is a delay in your flight from Los Angeles to Charlotte. As a result, you will need to contact an airline representative to change your connecting flight itinerary. We are sorry for any inconvenience.”

This was the message that greeted me first thing this morning. As if the return to sub-zero temperatures in Easton weren’t bad enough, realizing that there would be no connecting flights from Charlotte to Allentown isn’t exactly something I needed to hear on the last day of an amazing journey. But as I now sit here on a plane en route to Philadelphia with a ninety-minute car ride to follow, I know that nothing is going to dampen my mood. So while we cruise at altitudes above 30,000 feet, let me take the time to tell you about my final day in Hollywood.

I spent most of yesterday cruising around Los Angeles with one of my favorite people. Someone who; although she is a fan of the dreaded San Francisco 49ers, is one of the coolest, most talented people I’ve never ever met.

Carrie Carnevale is a filmmaker who has written and directed amazing short films that have won her quite a lot of acclaim over the years (including many times by yours truly). And like most of the other people I’ve met on this west coast excursion, Carrie and I had up til now only known each other through emails and various telephone conversations. Today was going to be the day we would meet each other after nearly three years of this back and forth banter. There was a heightened sense of excitement in the air.

When Carrie arrived at the hotel, it was a surreal moment. Yes, I had already experienced this giddy feeling of meeting people for the first time a lot during this trip but this meeting was extra special. After making our long overdue introductions we soon ventured off to spend the afternoon doing touristy stuff.

During our trip I was unfortunately introduced to real Los Angeles traffic. So bad was it that we ended up having to change our plans on a few occasions. But I didn’t care one bit. Carrie and I talked for hours about our lives, our work and families as well as all of the other things that friends do. Carrie even managed to hook us up with a few actresses from her films: Anna Hanson and Ashley Watkins. Two people I’ve interviewed who I had also never met and two of the most creatively inspiring and independent women doing their thing in a place where the deck is often stacked against them – and they are succeeding! I could literally go on for hours about them and their awesome projects but in the interest of time, I’ll save those stories for future articles you’ll read!

After spending most of the day with Carrie, the final destination on my adventure was a planned night of debauchery with actor David Banks (a fellow metal head) cruising the Sunset Strip and visiting all of the metal head clubs where our favorite music began. But what happened next was completely unexpected and no doubt the last thing you would ever think I would do.

As I’m walking Hollywood Blvd to the rendezvous point where David is going to pick me up, he suddenly sends me this interesting text:

“Hey man. I just got invited to a red carpet fashion show event down on Melrose Avenue. Wanna go?”

This red carpet event would be another chance for David to have his picture taken and to talk about his killer new movie, “CUT!” which had it’s premiere last night. Then came the big decision for Metal Head James Wood —- Do I go visit the infamous Sunset Strip and bars like The Whisky and Viper Room (places I have never been to) or, do I go to a fashion show red carpet? 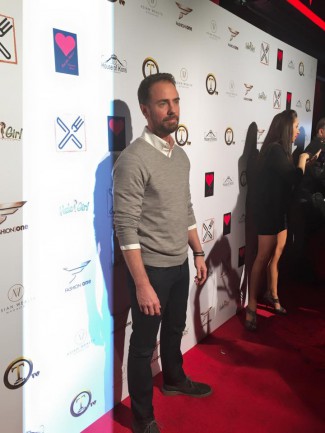 For the next several hours, David, his super cool companion Karen and I walked the red carpet, drank free booze and hob nobbed with Hollywood’s fashion elite. I could not tell you what the event was for or 99% of the people who were there. All I know is that there were so many beautiful women dressed to the nines as well as a few I’d rather not ever think about again. Although I did recognize actress Bai Ling on the carpet, most of the rest of the people at this event were complete unknowns (at least to me).

Following our adventures on the carpet, David took us back to the Arena Cinema for the last showing of “CUT!” for the evening. Together, the two of us sat and watched his movie again on the big screen. I recall looking over at him several times during the course of the film and seeing the biggest smile on his face. He was witnessing the end result of years of hard work, and I could not be happier for my friend. Forget about the Sunset Strip. This was David’s dream and he had made it come true.

This morning, David and Karen picked me up and drove me to LAX. As the radio in his car blasted some of our favorite tunes we talked about the music as well as his movie. Both of us promising we’d get together again soon. My guess is that this time our reunion will include the trip down Sunset Strip that never happened.

But then again, maybe there will be another red carpet event to go to!

This trip has been the adventure of a lifetime. Me, James Wood was at a Hollywood premiere, walked a red carpet and connected with amazing people who are strangers to me no more. It’s been fun, exciting, exhausting and everything in between.

In addition to missing my family and the small town I grew up in, this trip has made me realize that dreams really do come true. All it takes is a spark, a lot of hard work and a little bit of luck. I’m ready.

I hope that by reading this journal of my adventures in Hollywood it gives you the inspiration to follow your own dreams. It certainly did for me.