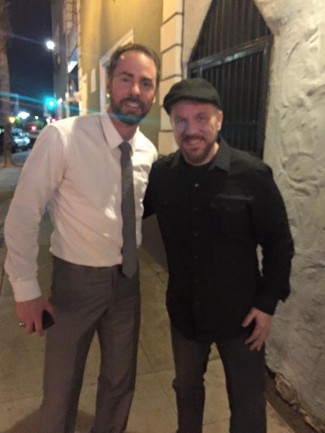 To say that yesterday was surreal is a bit of an understatement. It was actually the culmination of three years of phone calls, emails, interviews and follow-up conversations about this amazing new horror/thriller, “CUT!” which finally saw it’s premiere in Hollywood last night.

It was an evening where I finally got the chance to meet all of the wonderful people I’ve been writing about and to come face to face with a fellow brother in hair metal. Someone who would have taken on the world with me playing in bands on the Sunset Strip back in the glory days.

The story of how I met actor/musician David Banks is an interesting one. One that has its own musical connection as well at involves an incredible actress from a cult-classic horror film.

Back when I first started doing interviews, one of my angles was to seek them out through milestone events. Such was the case in 2012 when Wes Craven’s film, “The Hills Have Eyes” reached its 35th anniversary. Through hard work, due diligence and a little bit of luck, I had the opportunity to speak with Suze Lanier-Bramlett, who was the star of the original film as well as an accomplished musician and songwriter herself (Suze was also married to the legendary Delaney Bramlett).

Suze and I spent the better part of forty-five minutes discussing everything about the original “Hills Have Eyes” as well as her latest CD – Swamp Cabaret (which by the way is wonderful). After we were through I asked Suze if there were any other projects she was currently working on. Without hesitation, she told me she was involved in this little indie horror film project called “CUT!” where she got to play the role of herself. It was something that was new, interesting and exciting.

That’s what got the ball rolling for me. I decided to seek out these filmmakers and see what it was all about.

The first person I was able to contact was David Banks, who was one of the producers, writers and actors. What I thought was only going to be a fifteen minute interview wound up turning into a nearly two hour conversation. You see, David and I have almost the exact same taste in music.

Long story short, the two of us became instant friends. Not only talking about “CUT!”, but all of the bands and music we grew up loving in the 80s. David’s enthusiasm and passion was infectious and it was through him that I was able to reach out to many of the other actors involved in the film for interviews, including David Rountree, Dahlia Salem and Gabrielle Stone.

Fast forward to January of this year. David and I were emailing back and forth and he told me that the film was finally complete and that they would be having a Hollywood premiere.

That’s when I came up with the idea of paying tinsel town a visit.

The premiere was as exciting as any high energy metal show I’ve been to – and more. It was connecting with friends who up until that point had been nothing more than words typed in an email or a voice on the end of a telephone 3,000 miles away– and I just sat back and took it all in. I’m sure there were some people who noticed me standing aloof in the corner, wondering why I was there all by myself. The smile on my face would tell them the story. It was incredible.

Suze Lanier-Bramlett gave me the biggest hug when we finally met and made it a point of getting the introverted James Wood on to the red carpet for pictures with her.

Dahlia Salem and I talked for quite a while about her upcoming appearance on Patricia Arquette’s new show, “CSI: Cyber”. She was telling me how great it was for her to be able to work with Patricia and I said, “Wouldn’t it be cool if she wins the Oscar next week?” [Arquette is up for Best Supporting Actress for “Boyhood”]….What a question to ask an actress!

David Rountree, who is terrific in CUT!, told me about a new project he is working on in New Orleans next month and promised to talk more about it as things got rolling. It was a truly magical evening.

As David Banks and his beautiful companion drove me back to my hotel at 2am, I couldn’t stop telling him how great it was to be here and to finally meet him in person. Tonight we’ll be getting our metal on by visiting places like The Rainbow, The Whisky and Viper Room. Venues David and I would have surely frequented (and no doubt played in) back in the day if we had grown up in Hollywood.

As their car drove off into the wee hours I couldn’t help but go back to the conversation David and I had a month ago when he first told me about the premiere. He said, “You know, it’s too bad you can’t come out for this. It would be so cool to have you here.”

And somewhere in that statement there’s a lesson to be learned.