Both “rookie” directors are given the exact same script and budget as well as having the final say on all aspects of the film. It was a challenge that filmmaker Anna Martemucci was more than up for, and her finished film is an out of the park home run.

Told from a balanced perspective, “Hollidaysburg” is a beautifully shot, funny, coming of age story about a group of friends who come home for Thanksgiving break after their first semester at college.

In addition to “Hollidaysburg” Martemucci (along with husband Victor Quinaz), have already completed two other films: 2013’s “Breakup At A Wedding” and “Periods”, a collection of twelve short films put together in a Monty Python-esque fashion that was released last December.

I recently spoke with Martemucci about “Hollidaysburg”, her time on “The Chair” as well as some of her current and upcoming projects.

How did you become involved in “The Chair” docu-series?

Chris Moore had seen our first movie, “Breakup At a Wedding”. It was a film my husband, Victor directed and one that I co-wrote, produced and also acted in. I got to work with Victor side by side on the project, so it’s a movie that really means a lot to me. Chris hired us to do some work for him as writers on a web series that he was producing and it was on the set of the series that the idea of me doing “The Chair” began.

What attracted you to the project and influenced the direction you wanted to go?

The thing that really attracted me to the project was the idea that I would be able to make a teen movie that was set in Pennsylvania. Those two elements sold me right away. It was then just a matter of me knowing what I could to bring to the project as a director. I tend to write from an autobiographical place so I really wanted to make it personal and specific. I knew that I would have to do a major overhaul on the script in order to make it my own, so that’s what I did!

How would you describe “Hollidaysburg”?

It’s a coming of age comedy that deals with sex from a feminine point of view. Even though our main character is a dude, I really wanted to offer something that I haven’t seen before in the genre and something that was a more balanced gender look at sexual coming of age.

Did you look at your role on “The Chair” as a competition or was the plan always about creating a work of art?

From the beginning I looked at it as an opportunity to make a film. It’s very rare that someone will come to you and say, “I have the budget for you to do a film. Go do it!” There was so much to think about and I was given all of the control. I was completely focused on making the best movie possible within the crazy constraints of budget and time. I kept pushing the envelope to make sure that the movie I was making was something I believed in.

What were some of the challenges you faced making “Hollidaysburg”?

One of the biggest challenges was finding the right actors and getting Carnegie Mellon University to release our two female leads. They were two active students at the time of our shooting. Aside from those things, it was brutally cold and there were always periods where there was a lot of snow, and then times when there wasn’t any snow. We worried about continuity a lot. Keeping everyone warm was also a struggle, for sure! [laughs]. 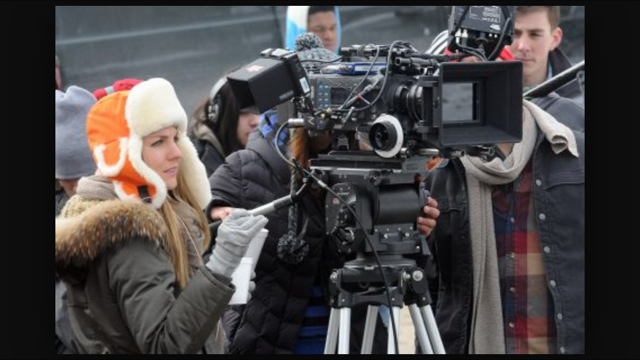 Is “Hollidaysburg” reflective of the type of films you’d like to make?

One of the most beautiful things about the whole experience was coming into a directorial voice that I had been honing for a long time and then getting the chance to speak in that voice cinematically. Seeing the final product and getting to share it with people was huge for me. It was a major transformation for me as a writer who did a lot of things with her husband into becoming a director. Although I love to do comedy and drama and films that are somewhere in between, the voice of “Hollidaysburg” is very much consistent with my voice as a filmmaker.

It’s great to have partners who keep things moving. Victor, Phil Quinaz and I just finished another movie a few weeks ago that’s very exciting. We’ve also completed a film called “Periods”, which is the feature film version of our short film series. It’s a journey through time that God himself takes you on. Kind of in the vein of Monty Python’s “Meaning of Life” or “Mel Brooks’ History of The World Part 1”. It’s got a lot of “Hollidaysburg” actors in it plus great cameos from such recognizable guys as Zachary Quinto, Penn Badgley, and Willy Garson.

What excites you the most about the future?

I’m looking forward to making more movies and would also love to see “Hollidaysburg” reach a larger audience, which is something that we’re working on. I’m so proud of this film. I know that more opportunities will come my way. This was a huge experience for me and I’m just excited to keep making films with this voice of mine.

Hollidaysburg, Periods and Breakup At A Wedding
are all available on iTunes or at Amazon.com

The Chair is available now on DVD