You’ve been hearing me rave about Director Carrie Carnevale’s short film Beside Her; a love story and fictional portrayal of the true human condition. Now here’s your chance to see the film for yourself.

‘Beside Her’ is part of the FirstGlance Short Online Contest powered by FESTIVAL GENIUS.  A competition where YOU get to choose the winner.

34 short films are in competition for over $2000 in prizes and the opportunity to premiere at FirstGlance Film Fest Philadelphia in October 2013! Anyone who registers on the FirstGlance website is eligible to watch and vote. The contest runs April 15th – May 14th. You are limited to only vote per day, per short film.

I’ve had the pleasure of speaking with Carrie as well as all of the actors from the film: Ashley Watkins, Erika Flores and Owen Conway. Check out my article below then head over to watch and vote for Beside Her!! Help support independent film making and the amazing cast and crew who did such a beautiful job on this short.

While watching “Beside Her”, you quickly forget that the lovers you see on-screen are female and become more enthralled with the deep love and connection they both share with each other.

Along with the amazing talents of actors Ashley Watkins , Erika Flores and Owen Conway, director Carrie Carnevale delivers a film that contains all of the elements that make up a great story: there’s love, tension, drama, passion, suspense and even a twist in the end for good measure!

But Beside Her is much more than a love story between two women. It’s a beautiful film about the human condition and the deep connection we all share but are often oblivious to.

Beside Her tells the story of Dr. Rachel Moretti (Ashley Watkins) and Sofia Rios (Erika Flores) and how, in one brief moment in time, their love for each other is measured beyond the norms of their everyday lives.

Tell me a little bit about the film’s origin.

CC: I wanted to write a story about the human connection; about the ways in which human beings connect with each other. Whether it be someone you’re dating, someone you’re married to, family, friends or even strangers; we’re all connected all the time. The problem is we tend to get distracted by the hustle and bustle of everyday life, that sometimes we forget that.

I wanted to concentrate this story on two people who are in a relationship because I think that type makes for a very complex and compelling situation. There’s an unspoken connection that two people in love share with each other that makes the connection a lot deeper.

Were you concerned at all about the content and subject matter of a love story between two women?

CC: No, not at all. Even when people initially read the script, they were glad to see that it was a story about love rather than a story about being gay. Showing that gay or not, love is love and we all have those same feelings of connectedness.

The musical score for the film is amazing. It perfectly complements the love scene and the ending as well.

CC: It really does. The song we chose for those scenes are an absolute match. Lyrically, it’s great and the mood it sets is just so powerful and amazing.

How did you get started in film making?

CC: I’ve always had a love for film making. I went to film school and spent time in the independent scene in the San Francisco Bay Area. Because of those years of work, I was able to learn so much about day-to-day production. I learned what to do and what not to do.

Along the way, I met some fellow artists who would hire me to work on their pieces, which I was honored and proud to do. In the past couple of years I felt it was time to start telling my own stories and producing my own projects and Beside Her was my first and I could not be more proud.

It’s a project where it was the right time and the right place. Everything about it just felt natural!

How would you describe Beside Her?

Ashley Watkins (AW): It’s a story about love and that intuitive connection we all have and listening to it.

We all go about our lives every day not really paying attention to that “little turn in your stomach” or the “ring in your ear”. It’s instinct.

What attracted you to this role?

AW: I’m very supportive and totally believe in equality for everyone. As an actress, there are no limits to the types of roles that I’ll play as long as I’m portrayed respectfully, and/or not exploited. If I can play something that emphasizes the common good for people and it’s something that I believe in, I love to do it. I was fortunate to get the opportunity to do that with this project and Carrie just has so much passion for the film.

It’s a story about two people who have a strong connection and in the end, there’s a twist. You don’t expect the ending at all.

Were you concerned at all about the subject matter?

Erika Flores (EF): No, not at all. I like portraying raw, challenging characters. I loved the idea of being connected and really showing the relationship.

What was it like working with Carrie on her first short film?

EF: It honestly didn’t feel like it was her first film, because the entire process was professional and handled so well.

What did you like most about the experience of filming Beside Her?

EF: Challenging myself with this role was fun. I also loved the location in Malibu where we shot my scene. That was beautiful.

If you had to briefly describe the story of Beside Her, what would it be?

EF: It’s a slice of life between two people and the relationship that they share. How their connection is so powerful that they can actually feel each other. 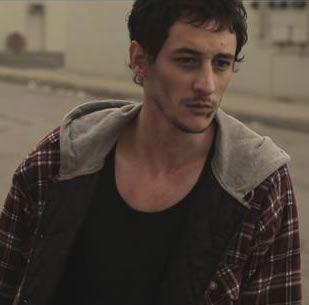 What attracted you most to the role?

OC: It was a role that I really wanted to play. Jeffrey is a heavy character with a lot of desperation. It’s not something that you get to play very often.

Tell me a little bit more about Jeffrey.

OC: Jeffrey is a “street” person who definitely has some issues.

But the thing that struck me the most about him was the fact that he’s so young. For him, it’s just about survival.

What was the experience of filming Beside Her like?

OC: The entire shoot was fantastic. I remember seeing the final product for the first time at a screening a few months ago and being really moved by it. The whole thing came together beautifully.

For more info on Beside Her, check out 17films Facebook page.