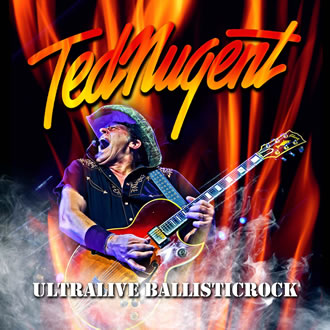 Regardless of what you think about his politics, there’s no denying the fact that Ted Nugent has solidified his place in rock history.

In addition to his successful solo career and his stints with the Amboy Dukes and Damn Yankees, the Motor City Madman has performed well more than 6,000 shows and contributed some of the most memorable guitar licks the rock world has ever heard.

Nugent’s new live CD/DVD, Ultralive Ballisticrock (set to be released October 22), isn’t just a souvenir of a kick-ass rock concert. It’s an experience — a spiritual revival, sermon, history class and rally for America rolled into one.

Nugent and his band, including Derek St. Holmes (guitar/vocals), Greg Smith (bass) and Mick Brown (drums), were filmed and recorded by seven cameras in 5.1 audio mix during Nugent’s 2011 I Still Believe Tour.

I recently spoke to Nugent about the new CD/DVD. We also talk his most famous guitar licks and more.

Read the rest of my new interview with Ted Nugent by Clicking Here!