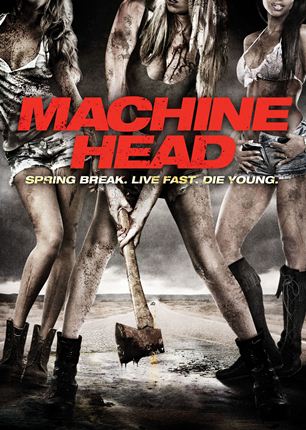 The deserts of Los Ranchos, CA aren’t exactly what you would call your typical spring break destination. But for long-time college friends Rachel (Sharon Hinnendael), Chloe (Nicole Zeoli) and Mila (Christina Corigliano) it’s the perfect place for a week of booze, boys and fun in the sun.

When Rachel’s wealthy father offers her the keys to a friend’s amazing desert house, it’s almost a dream come true. That is until she discovers that access to the beautiful home comes with a catch…

Rachel has to take along her two younger, obnoxious sisters (real-life twins Morissa and Alana O’Mara).

Rachel makes plans for her boyfriend and his pals to meet them at the home later that night, but during the drive up the girls find themselves terrorized by a mysterious black muscle car with tinted windows.

Upon reaching the isolated home things really begin to unravel. The boys never show up and the three friends soon discover that what first appears to be a prank turns out to be something much, much worse.

Although an original story on its own, Machine Head scores bonus points by using mild bits and pieces from several great horror films to help get its message of terror across, including elements of Halloween, Scream and even Friday the 13th. And when you combine that trio of terror with three hot girls and a muscle car, what’s not to love?

I spoke with actress Sharon Hinnendael (Rachel) about her experiences working on Machine Head and what she loves most about making horror films.

What attracted you most to this project?

I really liked the script. It wasn’t a typical horror film. I was excited about it from the first time I read it. It was fun and scary. Then I met Jim [Valdez, Director], Christina and Nicole. Everyone was so cool and we all focused on what our job was and brought it to life. This group of people I got really close to. The whole filming process couldn’t have been better.

How would you describe the story of Machine Head?

It’s a story about girls wanting to go away for a break and have a relaxing time, but then they start getting messed with and can’t figure out why or who. I remember we did a lot of night filming in Palm Springs which was really intense. Sometimes we would be out there late at night and I would think “Wow, this is creepy. If this really happened it would be terrifying!” [laughs].

What makes horror such a great genre?

The thing I really love about these movies is being on set and seeing how they’re made. I remember growing up watching The Shining and just being absolutely terrified by it. I have a very creative mind so in the middle of the night I would sometimes see things that weren’t there, or turn something that was there into something else [laughs]. It really had an effect on me. Making horror movies is a cool process to be a part of. Having something be that strong where it can terrorize you really interests me.

You have an intense crying scene in this film. How do you prepare for that?

For certain scenes, I think of things that are going on in my life and use that emotion to make it happen. For this one, my uncle had passed away a year before we filmed. I was close to him and remember for that scene I really thought about him and it helped me. Part of the job is having to get to that place pretty quickly.

Did you always know you wanted to be an actress?

I was in plays in high school and loved it but originally never thought about making it a career. I was from Green Bay and started modeling when I was 12 and went to New York and Europe and worked a few other places. The original plan was for me to move to Brooklyn, but a manager I was working with at the time convinced me to come to LA for a month to give it a go. While I was there I booked a few jobs and things started happening. I really love the acting part of the process.

Is there any advice you can give to other actors?

Really love what you do every day and don’t think of money or fame. The whole goal or the process is to come out of a project having had fun and made others feel something.

I have a film that’s going to be doing the festivals called “Anatomy Of A Love Seen”. It’s a lesbian love story that’s all improv and really intense. It’s one of my favorite projects because the creativity was all my own. I have a few other things coming up as well. My life is pretty crazy right now.