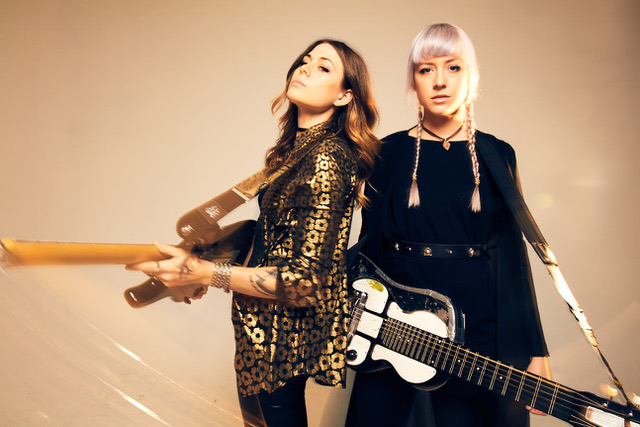 What originally began as an album of all-original material from Larkin Poe (which consists of sisters Megan and Rebecca Lovell) quickly took a turn when they began recording and posting traditional blues covers on various social media outlets.

The result was millions of views and an overwhelming demand for an album of traditional American roots music. This prompted Larkin Poe to return to the studio for Peach, a compilation of blues covers and original material that harkens towards their Southern musical heritage.

Tasty covers of songs like “Preachin’ Blues” (Son House) and “Black Betty” demonstrate reverence for the original versions but are fused with the ladies’ own unique style. The songs stand up equally against originals such as “Freedom”, “Wanted Woman” and “Pink & Red.”

The Lovell sisters are no strangers to musical attention having performed as part of the house band for the MusiCares 2017 “Person of The Year” event honoring Tom Petty and opening for the likes of Elvis Costello and Bob Seger. In short, they’re a force to be reckoned with.

I recently spoke with the duo about Peach, their songwriting process and their current setup.

Where did you draw inspiration for Peach?

Megan Lovell: We wanted to pay homage to music of the South and the Delta and make it into a very American roots rock record. It’s a culmination of all the Southern influences we’ve received over our lifetime.

Was there a certain theme you were going for when choosing covers for this album?

Megan Lovell: We’ve been making videos of covers for social media as a way to keep pushing ourselves and people have really responded to it. When the time came to make this record, there was a great demand for them, so we decided to choose our favorites from the videos. That’s what you get on the album.

Rebecca Lovell: We cover Sam House on the record [“Preachin’ Blues]. If you read the lyrics to the song written almost a century ago, they’re fantastic. It’s music that plays to a timeless human emotion. A raw questioning of soul and spirit.