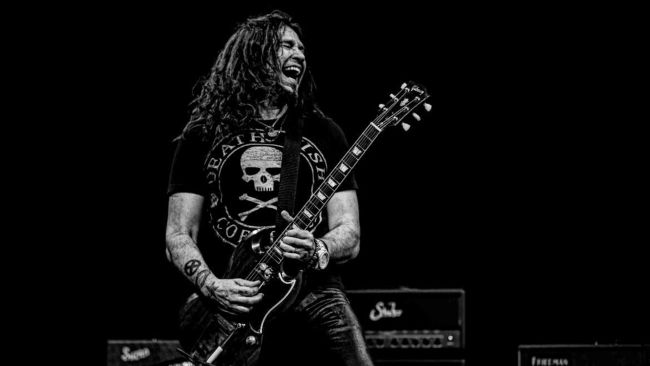 Right On The Money is the latest installment from Phil X & The Drills and a dynamic addition to the band’s already explosive discography. The guitar-driven track was recorded at legendary Capitol Studios with Chris Lord Alge and also features Daniel Spree on bass and Brent Fitz on drums.

The new single is separate from The Drills upcoming fifth album, Stupid Good Lookings Vol 2 – it’s a diverse compilation that will feature a different drummer, including Tommy Lee, Liberty DeVitto, Kenny Aronoff and Ray Luzier, on each song.

We recently caught up with Phil X about his new single and Gibson endorsement, as well as an update on the new Bon Jovi album.

Bon Jovi and Bryan Adams were scheduled to tour this summer, but the pandemic cancelled those plans. How have you been spending your time?

“I’ve been keeping busy doing remote sessions in my studio. People will send me their files and I’ll upload the session and lay down the guitars. Then I’ll send them back the session. It keeps my creative chops up. I also feel good about what The Drills are doing right now and being able to include my kids in the video for Right On The Money.”

Speaking of Right On The Money, how did the song come about?

“It means that no matter what’s going on you just have to stay positive. The song’s an opportunity to lift spirits in this crazy time.”

How did the opportunity to record that track at Capitol Studios come about?

“Chris Lord-Alge is a huge fan of The Drills and he had the opportunity to do a masterclass on recording live bands off the floor at Capitol. So, he called and asked if we’d be interested in coming in and recording three songs. It was a dream come true.

“I’ve done a lot of sessions and my favorites are the ones where everyone is recording together. Anytime I get a chance to do that with my band I just love it.”