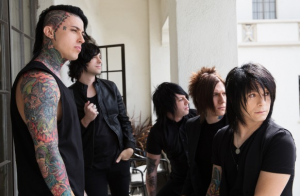 Ever since Ronnie Radke’s not-so-amicable departure from Escape The Fate, his subsequent incarceration and the formation of his new band, Falling In Reverse, both bands — and to an extent, their fans — have waged a semi-constant battle in the press.

Now, however, Radke has buried the hatchet with his former band.

To prove it, Falling In Reverse and Escape The Fate have joined forces to launch a major-market tour — the Bury the Hatchet Tour — which will make its way across the US beginning January 15, 2014.

Falling In Reverse’s sophomore album,Fashionably Late, which was released in June, introduces hip-hop and electronic elements to the band’s current combination of metal core and radio-friendly choruses, creating its own unique sound. The new album is also the first to feature bassist Ron Ficarro and drummer Ryan Seaman.

We recently caught up with Radke and discussed the album, the tour — and the end of his long, often bitter feud with Escape The Fate.

Read the rest of my Revolver Mag interview with Ronnie Radke
and see Tour Date information by Clicking Here!