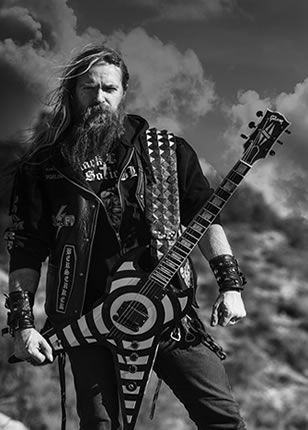 Zakk Wylde has announced the next chapter in the Black Label Society story, Catacombs of the Black Vatican.

The album, the first disc of all new material from the band since 2010’s Order of the Black, will be released April 8.

Wylde also has announced a new tour, “An Evening with Zakk Wylde.” The 13-city Canadian trek will feature Wylde and new Black Label Society guitarist Dario Lorina performing intimate versions of some of BLS’s most popular songs, plus readings from Wylde’s 2012 book, Bringing Metal to the Children: The Complete Berzerker’s Guide to World Tour Domination. You can check out all the tour dates below.

I recently spoke with Wylde about the new BLS album and upcoming tour and got his thoughts on Black Sabbath’s Grammy nomination.

GUITAR WORLD: What can fans expect from Catacombs of the Black Vatican?

I think everyone can expect a lot of fun and excitement [laughs]! It was like what Chris Farley did in that one skit, where he was selling that hair-care product. Make sure you always use the word “fun” when you describe it [laughs]!

Someone asked me what the difference was between this new record and the other nine. I told them that it’s basically all of the songs we used on the other nine records, except they’ve got different titles now [laughs]. It’s fun and exciting for the whole family!

Read the rest of my Guitar World Interview with Zakk Wylde by Clicking Here!