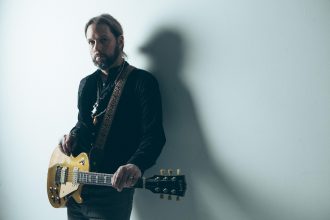 Rich Robinson’s new album, Flux—which will be available June 24—showcases an eclectic range of tempos, tones and tunings, all delivered with the same swagger Robinson first made famous with his brother, Chris Robinson, in the Black Crowes.

The album, which features the monster skills of Matt Slocum (keys), Marco Benevento (keys), Danny Mitchell (keys), Zak Gabbard (bass) and Joe Magistro (drums), not to mention vocalists John Hogg and Danielia Cotton, is—simply put—a powerful collection of music. From standout tracks “Music That Will Lift Me” and “Eclipse the Night” to the groove-laden “The Upstairs Land,” Flux ebbs and flows through different moods, in the end delivering a solid listener experience.

In addition to his new album, Robinson his the road as Bad Company’s guitarist for their current U.S. tour, which he’ll follow up with a tour of his own in support of Flux.

I recently spoke with Robinson about Flux, Bad Company, gear and more.

How would you describe Flux in terms of its sound—and maybe how it relates to your previous albums?

I think everyone builds their own relationship to music. That’s what’s so cool about it. For me, this is a natural progression and another step in the journey of where I’ve been and what I’ve done since I was 19 and Shake Your Money Maker came out.

Flux was recorded at Applehead Studios in New York. You’ve mentioned that you love recording there. What makes the place so special?

The studio and people up there are just great. I really like being up in Woodstock, and I spent a lot of time going there when I was living in New York. There’s just something about being there that I really can’t describe. Whenever I’m there, I always tap into something special.