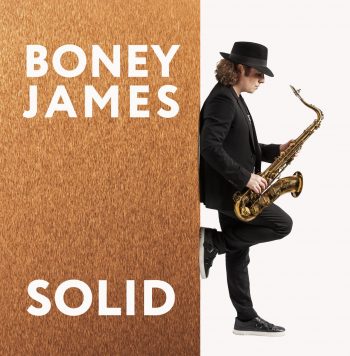 The inspiration for the eleven-track compilation flowed at an unusually quick pace for James and is chock full of the signature sound and movement. Most notably, on the infectiously smooth opening track, “Full Effect,” and “Luna,” which features an ethereal, almost Latin-fused groove.

Other highlights from Solid include the album’s title-track and “Tonic,” both of which inspired and built from licks performed by guitarist Kendall Gilder during sound checks on James’ Honestly tour. “Be Here,” an Adult-Urban single initiated by James’ longtime collaborator, Jairus ‘J-Mo’ Mozee, is another transportive track that features an inspired serenade from special guest, Kenny Lattimore.

With Solid, James delivers an album worthy of his depth, creativity and maturity. Moreover, it’s a welcome respite from the stress of today’s chaotic world.

Solid will be released on Friday, June 12.

I recently spoke with James about the new album and more in this exclusive new interview.

How did Solid come about?

Boney James: It’s been over two years since my Honestly CD and I started getting the urge to make new music. Whenever that feeling hits I’ll start collecting ideas. I discovered that as soon as I started writing, the songs just sort of popped out. Sometimes a song might have taken a little bit longer to develop but, for the most part, once I put my thinking cap on there they were.

How does the new album relate to some of your previous work?

BJ: That’s a tough thing to say. I just make the music and let other people decide what to think. Every record has its own character but I was feeling a strong sense of positive energy from this music. Some of these songs put a big smile on my face. I remember as I was making the record it was very transporting and took me out of the day to day worries of stress of life. That’s always what I try to do but I really felt it this time, particularly on a few of these songs. With everything going on in the world right now it’s even more appropriate to have something that might put a smile on your face when you listen to it.