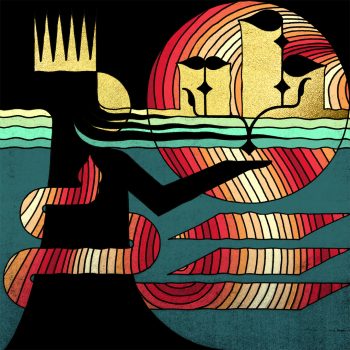 Fresh off the heels of their most recent album, 2018’s Delivery and Departure, L.A.-based Americana-roots collective The Sound of Ghosts is back with their highly-anticipated new single, “Heavy Burden.”

The track, diverse in its tempo and rich in sonic texture, was inspired by Eckhart Tolle’s “A New Earth” and the idea of carrying the weight of trauma and pain experienced throughout life.

Lyrically, charismatic vocalist Anna Orbison delivers an emotionally ubiquitous and haunting vocal to the song and takes the listener of a journey of pain and self-awareness. “Heavy Burden” also features a guest performance by trumpeter Paul Litteral, who’s resume includes working with such legends as The Rolling Stones, Tom Waits and Billy Joel.

To those not already familiar with The Ghosts, the band’s music blends the best elements of Americana, folk, rock and jazz into one tasty musical stew. Having performed extensively throughout the L.A. area and Pacific Northwest, where they’ve opened for such artists as Big Bad Voodoo Daddy, The Sisterhood and Oingo Boingo, their insatiable music has also been featured nationwide in commercials for major brands.

I recently spoke with The Sound of Ghosts’ Anna and James Orbison about “Heavy Burden” and more in this exclusive new interview.

James Orbison: Every song is different. In the past it would usually start with a riff idea that would be brought to the band and then we’d form it into something that sounds like the Ghosts. Anna has really hit her stride with songwriting and leading the charge with ideas and melodies.

How did the song “Heavy Burden” come about?

Anna Orbison: We write in a lot of different ways but the melody and lyrics of “Heavy Burden” came to me all at the same time. I had been reading Eckhart Tolle’s “A New Earth,” and his idea of a “pain body” being the weight we carry around from traumas and pain we’ve experienced throughout our lives. It really stuck with me. When we carry that pain with us into relationships it ends up weighing our partners and our friends down and creating more pain for the people we care about. “Heavy Burden” is a reminder that when we hurt our loved ones it’s coming from our own pain and not from love. Love is not constant pain.

What can you tell me about Paul Litteral’s involvement in the new track?

AO: Paul and I met when I first moved to L.A. almost ten years ago. He’s been playing live shows and on our recordings for the last few years and we’re so very lucky to have him. He’s played with The Rolling Stones, Iggy Pop, Billy Joel, Tom Waits, and so many other incredible artists.

Interview with The Sound Of Ghosts By Clicking Here.