I can still remember it like it was yesterday. I was fourteen years old and my parents had just paid for my first subscription to The Amazing Spider-Man comic book. Having grown tired of my whining for sixty cents every month and my pestering of the local drug store for the latest issue they gave in to my demands and sent in a check for $7.20.  I could hardly wait for the first issue of my favorite super-hero to arrive in my mailbox.

I was a Spider-Man from way back you see. As far as I could remember. Well, I’m guessing that my ability to recall things started at age five so at the time probably about nine years if you want to really get technical about it.

Regardless, if there was anything Spider-Man related, I wanted in on it. I loved the idea of  how a guy everyone considered a dork (like me) could become this superhero with all the abilities of a spider. The red and blue tights concealing his identity only added to my excitement.

Want to know how much I love Spider-Man? Here are just some of the highlights:

Back to my original point: I was so excited to be getting my first Spidey subscription that I eagerly checked the mail every day. Days turned into weeks but I knew my heart my boy Spidey would never let me down. He’d arrive, just in time, like the theme song from his cartoon said. Sure enough, one day I opened the mailbox and there was a comic book completely surrounded by a brown paper bag style wrapper. Spidey was HERE in all of his red and blue glory!!

I hastily tore open the paper in anticipation of what lay inside, being extra careful not to tear any pages. I could just picture Spidey beating the crap out of Dr. Octopus or The Green Goblin. Maybe the cover would have a picture of Spidey’s girlfriend, Mary Jane Watson, dangling from a building along with some villain laughing menacingly as Spidey was just out of reach of grabbing her. I could hardly wait.

Anticipation and excitement vanished immediately and my jaw dropped when I saw the cover of issue #252 looked like this: 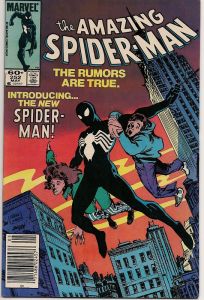 What the? Who is this? Someone must have screwed up at the comic book department. My parents checked the wrong title when they ordered. NEW Spiderman? What effing’ rumors are you talking about? I never got that memo. Apparently though, some alien costume had replaced the red and blue tights my homey always wore and I was NOT a happy camper.

With a quick look insider this comic I determined there was no red and blue costume at all. This was NOT my Spider-Man so out of frustration this issue quickly went into the garbage. On a side note: today that issue, which cost sixty cents back in 1984, is now worth $55.

Looking back though, I still have good memories of my days with Spider-Man and we still see each other when ever a new movie comes out (the next one being next summer).

Sadly, my dreams of being Spidey and climbing the walls don’t seem to be happening any more (thanks Bro). I do, however; still have my comic book collection tucked away with a lot of good back issues (one of them NOT being issue #252 thank you very much). I’ve even transferred the 8mm movies onto DVD so I can enjoy all of the adventures again. I’ll be selling them for $9.99 an episode for anyone interested.

It sadly took four years of this dark costumed imposter posing as my boy until the red and blue suit returned but the damage had been done. I had spent the better part of my teen years suffering in silence as my favorite hero played dress up. But it all worked out. I’m just glad my Spidey came back!

One thought on “Spider-Man”