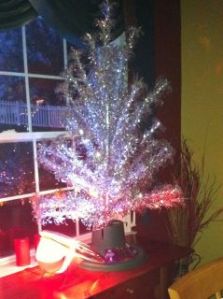 Last night, I found myself perusing through my old family photo album recalling days gone by. A few years ago, I had painstakingly organized hundreds of loose, old photographs into this particular volume and placed them by year as best as I could recall (some of which dating back to the early 1900’s).

I put them in the order of family events such as births, graduations, marriages etc. It took quite a while for me to get them into this chronological order, but now I have a time capsule of my family from a century ago until now.

Every so often, I like to recall a particular relative who is no longer with us, or perhaps the urge strikes to see just how deep of a purple the color of my bicycle was when I was eleven-years old. And once my curiosity has been satisfied, the album of memories quickly goes back on its shelf.

But last night was different. As I took a stroll down memory lane to recall an Aunt a familiar theme seemed to glare out at me from the pages of my family history: Christmas.

From the earliest years of black and white photos I noticed many that were taken around Christmas time. There were quite a few of my mother and her parents over the years striking poses with ornate Christmas trees in the background. I saw the young girl who would one day give birth to me standing with her doll next to an Evergleam aluminum Christmas tree. The smile on her face. The wonder in her eye. Christmas was coming.

I began to lament the fact that the photo wasn’t in color. I wanted to see the deep blues and greens that decorated the house, the color of her doll’s dress, the color of my mother’s cheeks. Maybe there was a huge snow storm and she had just come in from outside. I wondered how many days it was until Christmas.

Page after page, I was greeted with tidings of great joy. Photographs of long deceased relatives celebrating Christmas at my grandparent’s home. There were pictures of people eating, children unwrapping presents and even some solo shots of the annual Christmas tree itself. But there was one thing they all shared in common: the warmth of family.

I spent the longest time browsing the Christmas section of photos. Probably longer than I’ve looked at any of them in years. All the while I was thinking about where I was in my own life at the time they were taken and what I was feeling at the time. Then I began to wonder why I seemed to gravitate more towards these Christmas photos as opposed to other ones. Certainly my grandparent’s 50th wedding anniversary pictures from 1983 were more important than a picture of me with my first dog at some unknown Christmas was, right?

Aside from the religious and trivial commercialism that comes with it, here’s the thing you need to know about Christmas photos:

Christmas is the one holiday where memories are made and easily recalled with photographs. I can look through pile after pile of old Christmas photos and once again see the gaudy flashing star that sat atop the tree every year; the colored lights in the window and decorations that adorned the walls; the Polaroids of me sitting with my grandfather on his Archie Bunker recliner and even the year Santa brought me Stretch Armstrong and his buddy Stretch Monster.

Even though I may not be able to recall the exact year, I KNOW that they were taken sometime in December. It seems to me that Christmas photographs are the only ones where you can narrow down memories from years into days.

Here’s hoping you make more of your own this holiday.