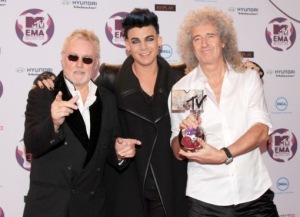 The past few weeks have finally made me take a second look at how the news media reports stories. If you follow politics at all you’re already well aware at how each side (Democrats and Republicans) claim each other is in cahoots with the media to further their own agenda (the “liberal” and “corporate” media respectively).

Quite frankly, I think the argument is ridiculous. I mean, who in their right mind would want to use an organization who can’t even get its own facts straight?

Late last week singer Adam Lambert announced that he would be singing with the band Queen for the MTV Europe Awards. This led news organizations to some how believe that the announcement really meant Lambert was going to be the replacement for the band’s late singer Freddie Mercury on a tour this summer.

This would have been big news, had it have been true of course. This was something the media has been chomping at the bit to report. I mean, Adam Lambert is a good singer AND he’s gay. It makes perfect sense that he would replace another gay singer in one of the biggest bands of all time.

But these news outlets, in their haste to always one-up everyone else, reported this non-existent replacement story and subsequent tour without having all of the facts straight. Even if Mr. Lambert’s comments were a bit ambiguous, someone wearing a fedora with a “Press” pin on it should have clarified it before sending it off to cyberspace.

Another example of the media jumping the gun happened just a few weeks ago. Long time Penn State football coach Joe Paterno, who had been in ill-health for several months, was about to pass away. Being that one of the greatest coaches of all time was at death’s door was more than enough information for a sea of journalists to descend upon Happy Valley to get the scoop and report of his death seconds after it had happened.

Unfortunately, some small college newspaper claimed it had received an email informing players that Coach had passed away a day early. When they went to press with it, all the other news organizations blindly followed suit and within hours had to apologize for it. The next day, Coach Paterno died (for real this time).

These little “accidents” are definitely cause for concern. There needs to be more accountability when reporting. Especially in an age where information goes out to the world in seconds.

If a bunch of farmers could fall for a radio station saying we were being invaded by aliens in 1938 consider this: What if the media all reported at the same time about a bogus nuclear attack by some rogue nation without having all the facts first? I think there would be people taking to the streets with more than pitchforks and torches to combat the alien menace. We as a society can not allow these news outlets to control us. We need to get the facts straight. 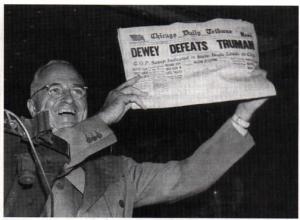 So whether it’s the New York Giants posting they’ve won the Superbowl on their website before the game is even played or news organizations announcing Dewey defeats Truman in the 1948 election before all the votes were counted one thing is certain. We need to take everything these news outlets report on with a grain of salt.

4 thoughts on “Beware of Media”