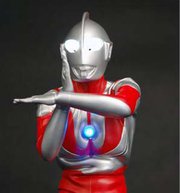 Here’s a story worth re-telling. Last year while paying a visit to a local Best Buy I took notice of a “Bargain Bin” of DVDs they had set up in the middle of the store. The bin contained piles of DVDs they were trying to unload and every DVD in the bin was $5 each.

I curiously perused the piles of Paul Blart: Mall Cop and Vin Diesel throw aways not really knowing what I was looking for. Anything but the aforementioned ones might have peaked my interest.

As I reached the bottom of the pile my eye caught something that took me back to my childhood. It was if a huge vacuum had just sucked all the sound out of the area I was standing in. My heart began to race and I swore a tear started to run down my cheek.

No way. It couldn’t possibly be… but it was…the HOLY GRAIL.

The Complete Collection of Ultraman on DVD. The swirling clay introduction, the orange suits and motorcycle helmets, the 1966 Corvairs they used to drive and of course, Ultraman himself.

I think we as a society have grown soft when it comes to our super heroes. Oh sure, we still want the hero in the tights to rescue the beautiful girl and save mankind from the forces of evil. But the truth is, we’ve become accustomed to watching CGI animated superheroes saving the world from these baddies. Like Tobey Mcguire as Spiderman hanging from a rope with a green screen behind him that will later become the city of New York.

Sadly, those days are gone.

Here’s the premise of the show taken from Wikipedia:

The storyline begins in the near future. Sinister aliens and giant monsters constantly threaten civilization during this period. The only Earth organization equipped to handle these disasters is the Science Patrol, a special worldwide police force equipped with high-tech weapons and vehicles, as well as extensive scientific and engineering facilities.

Led by Captain Mura, the Science Patrol consists of Arashi, Ito, Fuji (the only female member) and Hayata. The patrol is always ready to protect the Earth from rampaging monsters, but sometimes (ahem, MOST of the time) it finds itself outclassed.

When the situation becomes desperate, Hayata, the Patrol’s most capable member, holds the key to salvation in the form of the “beta capsule,” which, when activated, allows him to transform secretly into the super-humanoid-powered giant from space, who becomes known to the people of Earth as Ultraman. 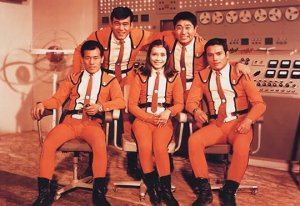 While active as Ultraman, Hayata’s human body goes into a type of deep coma, reviving only after the threat has been neutralized and Ultraman willingly departs.

At the beginning of each transformation from Hayata-to-Ultraman, the warning light on the giant’s chest begins as just a steady blue color. But as Ultraman exerts himself, the color timer changes to red, then blinks-—slowly at first, then with increasing rapidity—-as his energy reserves get closer to exhaustion.

As the voice-over narrator reminds the viewer, beginning first with episode 2 and for each episode thereafter, if Ultraman ever reaches the point of total energy depletion, he “will never rise again.” How terrible!

So the formula is simple: Every episode a giant monster (aka dude in rubber suit) attacks. The Science Patrol goes into action and tries to defeat it. Of course, they can not. Just as all hell is about to break loose, Hayata raises the beta capsule into the sky, activates it, and becomes Ultraman (aka dude in rubber suit). Ultraman does battle with the giant monster and just before his time on Earth is about to expire he vanquishes the creature using one form of his cosmic powers and then flies off.

I don’t mean to brag about the show but for a seven-year old boy named Jimmy Wood, this was ‘da BOMB!!! I remember the best part was the anticipation for Ultraman to show up and open a can of whoop ass. Whenever Hayata would raise the Beta Capsule and the voice said: “Using the Beta Capsule, Hayata becomes Ultraman!” the whole house could have burned down but I wasn’t moving from the TV.

Ok, stop laughing. Ultraman was the cornerstone of my life as a kid. I remember literally RUNNING home from school to catch his exploits. It didn’t even matter if I missed the beginning of the show either. The story line didn’t concern me. As long as I was there when the Beta Capsule was activated and the can of whoop-ass opened I was a happy boy. Believe me, even now there are days where I could REALLY use that Beta Capsule.

But kids today don’t seem to get it. I tried watching it with my own daughter but I think her interest in it is simply to laugh at me and call me a dork. That’s ok because it’s true. I am a dork.

A dozen years ago Hiroko Sakurai, the woman who played Fuji on the show, actually came all the way from Japan for a Sci-Fi convention in New Jersey. She couldn’t speak a word of English but I stood in a long line to get her autograph and my picture taken with her. It was exciting to do as an adult so I imagine I would’ve been standing in a puddle of my own pee if I went as a seven-year old.

I know, I know. It’s not a show for everyone. “To each his own” and all that crap. But consider this as another reason to own the collection:

Like Kung-Fu movies watched late at night, Ultraman can work better than any sleep aid you’ve ever tried. It’s all natural, more powerful than Ambien and Lunesta combined and has ZERO harmful side effects.

So the next time you can’t sleep, pop in a DVD and enjoy. I recommend Episode 15. It puts me out within ten minutes. You might sleep for days….Trust me, if you’re not a fan and can make it through the first two episodes without falling asleep you should seek professional help for insomnia and sleep apnea immediately.

Because if nothing else, watching Japanese dudes wrestle in rubber suits and airplanes where you can see the strings controlling them on camera induces sleep faster than tryptophan from the main course on Turkey Day.

But Ultraman is STILL cool. It was the best $5 I ever spent.