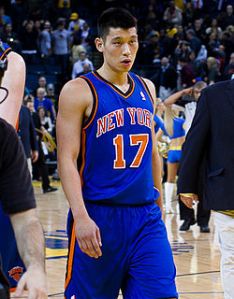 I don’t know about you but I’ve sure had enough of these news stories about New York Knicks’ star Jeremy Lin being stereo typed.

Personally, I’m not a big follower of NBA basketball but it’s concerning to me that in this day and age we still have this racial nonsense going on.

In case you’ve been asleep under a rock, Jeremy Lin, a Harvard graduate whose parents are of Taiwanese descent, was a bench warmer for the Knicks but finally got the opportunity to play and became an instant sensation.

His success helped the Knicks win several games with tremendous efforts and last second wins. “Linsanity” became the word of the day in daily sports reports.

But one day, in the midst of a nice winning streak, Lin had an “off night” and the Knicks wound up losing their first game with him as a starter.

So what do you suppose the headline read on the ESPN website?:

“CHINK in the Armor”

You’ve got to be kidding me. You mean there was no one who proof read that article before it was posted, saw that title and didn’t raise a red flag?

But wait, it gets even better (or, worse in this case). Today I read a story that  Ben & Jerry’s, the ice cream company, decided to make a flavor to celebrate the success of Lin.

Ben & Jerry’s has named a frozen yogurt flavor “Lin-sanity” for the current NBA superstar Jeremy Lin. The frozen yogurt was originally intended to feature a honey swirl with fortune cookie bits in it.

After appearing briefly in the Boston area, the frozen yogurt was changed to include waffle bits instead of fortune cookies. Ben & Jerry’s has apologized for any potential offense that was taken for the use of the fortune cookies.

Fortune cookies? Nope, don’t see any stereotype there either.

One thought on “Enough With The Jeremy Lin Sterotypes”