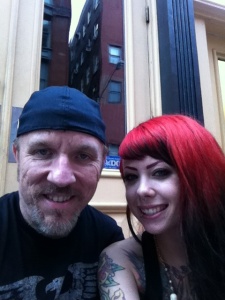 I’ve waited six long months to be able to tell you this story. No seriously, I’m not kidding its been that long. I’ve had a five-part blog that’s been in the works since last September and at last I’m finally able to reveal it.

I’ve got good news, bad news and great news! I’ll explain them all to you in that order:

Good News: Last summer, I submitted a request to be a candidate for Season 2 of  the TLC television show NY Ink and was actually chosen to have my segment filmed for the show!!  I got to travel to New York City, go on set for the show, tell my story and get my first tattoo done by none other than Megan Massacre.

After it was all over, I started to write a blog about my experience. And that blog got so large that it led to another blog. Which led to another. And another…. Before I knew it, I had written five parts.

Bad News: Season 2 episodes began airing in December of last year and my segment never made it to air. (Although they did show a glimpse of my session in a transition from one scene to the next). It’s too bad because I already had my IMDB application ready and several agents and publicists on stand-by. Sadly, I had to tell them the bad news. (Hope you all realize those last two sentences were a joke).

Anyway, through out the season I was already pretty much aware that my segment wasn’t going to make the final cut but I was contractually obligated not to say anything about my time on the show until the last episode aired.

Which was last night.

Great News: Starting Monday I will begin posting the blogs from my experiences on NY Ink. From the ride in to the city, to being on the set, getting tattooed by Megan and meeting most everyone from the show. You’ll also get to hear my “rock and roll” story and see the final work of art.

Although obviously a bit bummed that my segment didn’t air I have absolutely no regrets about it. It definitely wasn’t your typical tattoo experience.

If you’re already a fan of the show and are sad that its over here’s one last NY Ink story you didn’t hear.

One that I’m excited to finally be able to tell you about.

5 thoughts on “The NY Ink Announcement”