It’s not often you come across someone as cool as Marie Bollinger, an actress making her mark on the Hollywood scene in commercials and movies like “Pelt” and the soon to be released suspense/thriller: “HUFF“.

Marie is an adventurous powerhouse and a force to be reckoned with. One look at her video reel shows that she can play a multitude of roles.

From scream queen to dramatic actress to comedy she’s the total package. Did I also mention she’s cool?

My first encounter with Marie was from her role as the voyeuristic Jessica in “Pelt”, a Richard Swindell film that pays homage to the classic camper/serial killer movies of the 1980’s. Marie was fantastic as the promiscuous camper who winds up getting captured, caged and, well you’ll just have to watch the movie to find out.

“HUFF” was recently screened to an enthusiastic crowd at the Texas Frightmare Weekend and received rave reviews from hardcore horror fans. With an official release scheduled for September, Marie’s star is certain to rise to new heights.

I had the pleasure of speaking with Marie and discussing her roles in both “HUFF” and “Pelt”. In addition to being a phenomenal actress, I also discovered that Marie has amazing athletic prowess, an interesting musical hobby and an awesome sense of adventure.

goJimmygo (gJg): Marie! It’s so great to speak with you!

gJg: Was the “HUFF” screening at Texas Frightmare Weekend your first experience at a horror convention?

MB: Yes it was. It was the first time I’ve been to any convention actually. It was something I’ve never experienced before and it was amazing! I couldn’t believe how many horror fans were there. They’re so loyal. Texas Frightmare was really a great place to premiere the film.

I remember at one point meeting a guy who told me that it was his sixth time coming. He said he keeps coming back to them because he likes meeting the film makers and hanging with friends watching films. Everyone there just shares their love of the genre together. It’s pretty cool.

MB: It was awesome! There was such a great turn out and most of the cast was there too which made it even better. I actually sat next to Elly and Jenna and we watched the completed film together for the very first time.

gJg: When is “HUFF” going to be released for the rest of us?

MB: We’re being told sometime in September. That’s what we’re shooting for.

gJg: How did you the role of Brixi come about for you?

MB: I actually landed the role in part from a movie I had done previously called “Pelt”.

A mutual friend had introduced me to Paul Morrell (the director of “HUFF”). Paul had seen “Pelt” and liked my performance. He found me through Facebook and called me in to audition for the role of Brixi.

MB: I remember the first audition went really well. But after the callback I remember walking out thinking I had just blown it. I went home down on myself. And then on 11-11-11, of all dates, Paul called me up and offered me the part. <laughs>

gJg: What’s the premise of “HUFF”?

MB: It’s actually a really twisted take on the story of “The Three Little Pigs”. There’s an abusive step father, Huff (Charlie O’Connell) and a selfish mother, Lorelei (Elina Madison) who is blind to what is going on between her daughters and Huff.

My character, Brixi knows that she has to get out of the situation and ends up taking on the role of martyr in order to protect her sisters Shay (Elly Stefanko) and Styx (Jenna Stone).

Meanwhile, Lorelei takes Huff’s drug money and gives it to us to start new lives. That’s when Huff comes after us and the real horror element of the film begins. Up until that point the movie is more of a thriller.

So we run off and without giving too much away, let’s just say we make some decisions that got the crowd going at Texas Frightmare. <laughs>

gJg: What was it like working with Elina Madison?

MB: Elina is awesome! I’ve known her from seeing her at some of the commercial auditions I’ve been to. It wasn’t until later that I discovered she had this extensive resume of horror which was very cool.

I remember her coming to the table read and just laying all of her cards on the table right away. She just told everyone that she was going to do her own thing and for us to not be offended if she went off by herself. She was that focused on the story. I respect that. She was very professional.

gJg: I have to ask you this important question: Did you know that Charlie O’Connell (Huff) was “The Bachelor”?

MB: I honestly didn’t. I had never watched “The Bachelor” before and had to look it up. I went in blindly so I really didn’t really know anyone. <laughs>

gJg: Any interesting stories you remember while filming the movie?

MB: Well, I actually lived on the set pretty much. We were offered places to stay while we were filming but I didn’t want to drive so I just decided to stay on location. Our casting director, Meg Hairell, didn’t feel comfortable with me staying there by myself so she stayed there too.

I remember having to wake up every morning before anyone, even if I wasn’t due on the set, because the makeup room also doubled as my bedroom.

If I wasn’t shooting I was often napping. Meg has a whole collection of photos showcasing my skills of being able to nap anywhere but mostly curled up in a corner of the room. <laughs>

It was a creepy place because it was next to a burial ground and people had said they saw ghosts walking around on the property. I was really hoping for something scary to happen but nothing did.

gJg: Having now seen the movie, what do you like most about it?

MB: I think the fact that there was a subtle comedic element to it. Some of my favorite horror movies all have a little bit of comedy in it. It’s not always obvious but it’s there. Charlie really brought some awesome comedic elements to it. I was surprised at how well the sprinkle of comedy worked. It’s all so subtle, yet also real. 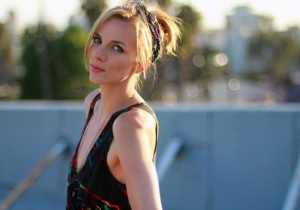 MB: “Pelt” was a really fun shoot. I remember we all stayed in this great cabin-like hotel and really bonded together. It was great fun.

One of my favorite movies from a few years ago was a film called “The Signal”. I remember that there was this guy in the movie who I thought was absolutely phenomenal but I didn’t know who he was.

Justin Welborn (who plays Jon in “Pelt”) and I became good friends during filming. After we had completed shooting the two of us were hanging out together and he asked me to check out this movie he had made: “The Signal”.

I was like: “No way, that’s YOU??” I had just gotten done working with him and had no idea that he was in one of my favorite movies, which says a lot about his ability to transform as an actor. He’s a chameleon of sorts. <laughs>

gJg: I found “Pelt” to be just like some of the other horror movies I loved watching during the 80’s. The “Friday the 13th” types with the over the top kills, the promiscuous ladies, the funny one-liners at the “wrong” time….

I remember being at the table read and Richard Swindell (director and a really cool dude) told us: “I’m not reinventing the wheel here. Let’s just have fun. It will be a great experience.”  And he was right, it was.

gJg: I remember reading where Richard said he knew a joke was going to work in “Pelt” if it made you laugh during the table reading.

MB: Yeah, I have a sense of humor of a 12 year-old boy and so does Richard. It was a blast. <laughs>

gJg: When did you decide you wanted to become an actor?

MB: I think it was when I was in elementary school. I remember being involved in a poetry contest and at the time just thinking to myself that acting was something I really wanted to do.

I had always been involved in plays and drama during school but I was also an athlete. I won State my senior year in the high-jump and went to college on a scholarship. Being an athlete was a big part of my life.

I graduated college with a BFA in Electronic Media but was never brave enough to take that first step and do what I really wanted to do. Then one day my father, who always knew I had the desire to act, told me to just go for it. So I did. I moved to LA and immediately started booking commercials.

gJg: I was watching your video reels and saw your sky diving adventure. What was that experience like?

MB: It was such a great experience. For one second, and quite possibly the longest second of my life, I literally thought I was going to die. But once I realized that I was actually just free-falling, it was awesome! I love stuff like that: heights, being scared, adventure. 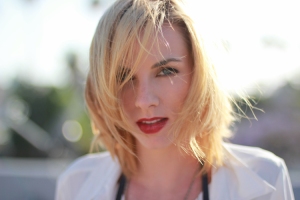 gJg: What do you like to do in your spare time?

MB: One of the things I like to do is collect vinyl record albums. I have a lot of classics like David Bowie, Brian Eno, Phil Collins, Patti Smith, Billy Joel. A lot of punk rock from the 70’s. Some garage rock from the 50’s and 60’s. Just a wide range of music.

I’m actually going through a big Leonard Cohen/Patti Smith phase right now. I think if I could have been born in another time it would have been the 60’s.

gJg: What’s projects do you have coming up?

MB: I have a couple of short films in the works along with a feature film called “Listening”.  It’s a story of two broke college grad students who invent mind-reading technology. If it gets into the wrong hands, well then it may just be the end of free will.  I play a brainy vixen in this one.

It’s a fantastic screenplay and I’m very excited about it!

Article first published as A Conversation With Actress Marie Bollinger on Technorati.