Every so often, fate has a funny way of introducing you to some really amazing people. Such was the case for me when I met Lisa Jey Davis.

Lisa is role model for people who want to live their dreams. After going through a rough divorce, she made the decision to travel to Los Angeles and start a career in the production end of the entertainment industry. Through hard work and perseverance she became talent coordinator on the production crew of The Billboard Bash, a pre-show for the Billboard Music Awards. She hasn’t looked back since.

Today, Lisa owns her own successful public relations firm, Jey Associates Marketing and PR. She’s also an award-winning writer, a fitness instructor and a regular blogger/vlogger, both as herself and as her “alter-ego”, Ms. Cheevious.

As a blogger, she regularly documents and videos the adventures of her life. From the satisfaction of trying out for the Lingerie Football League with girls half her age to having to make a difficult decision when diagnosed with the BRCA 2 genetic mutation; Lisa is truly an inspiration.

Her latest project, a book entitled: Ms. Cheevious In Hollywood – Adventures & Mishaps of an Accidental Hot Mamma promises to be a guilty pleasure for anyone interested in learning what really goes on behind the scenes in Hollywood. It’s also a must-read for women who’ve recently experienced life trauma, such as divorce, and want to regain the confidence and courage to change their lives for the better.

I had the pleasure of speaking with this amazing woman and find out what makes her tick.

goJimmygo (gJg): You are one busy lady. How do you find time to do all this?

Actually, it’s because I love what I do. But I must admit, as I get older I more often find myself thinking, “Hmm, that couch over there is looking kind of nice to sit on”. <laughs>

gJg: Tell me a little bit about your book.

LJD:  It’s the story about my post-divorce enlightenment. About jumping into the world with both feet and saying, “It’s my turn to do what I’ve always wanted to do”. For me, it was pursuing a career in the entertainment industry. It’s the story of the whole process from divorce to pursuing the dream and all of the funny things that happened along the way. There will also be some stories about the celebrities I’ve met. It will be fun.

gJg: Tell me a good Ms. Cheevious Story from the book:

LJD: In 2002, I was working for MTV on a show called ICON.  Aerosmith was picked as that year’s ICON. What MTV would do was bring other popular artists and bands in to perform the “ICON’s” songs.  I remember we had Train performing “Dream On” and Pink did “Janie’s Got A Gun”.  The members of Aerosmith were all part of the audience. It was similar to an awards show and my job was to work with the band’s wives and kids  – as the kids were participating in one of the numbers.

I remember at one point where there were two guys I had to take somewhere. So I was taking them back to their seats via the front row when all of a sudden everyone stopped. I suddenly realized that I was standing right next to Pink. What I didn’t know was there was also film crew there filming her while she was dancing. So I literally just stood a foot away from Pink and stared at her while all of this was going on.

All of sudden, she realizes that I’m standing there staring at her and she looks at me a little nervously like ‘Who is this crazy girl and why is she staring at me?’

But I swear to you, I am not a Pink stalker. Honest! <laughs> 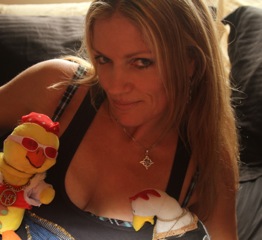 gJg: Another dream you followed was trying out for The Lingerie Football League. How did that come about?

LJD: When the Saints went to the Superbowl a few years ago, my boyfriend (who is a huge Saints fan) and I bought tickets to Miami. At the time, we didn’t know if we would even be able to get into the game (we didn’t) but we went for the experience and had a great time. While we were there, I was able to get us into the Lingerie Football League’s Superbowl (the eve of Superbowl), as well as the after-party.

Initially, I thought it might have just been girls running around in g-strings but they were actually playing in bra tops, workout shorts and pads, and I loved it! It inspired me. I felt I was in pretty good shape so I thought I would try it. When I found out that they were holding tryouts here in LA the following year,  I signed up and it was so much fun.

Ms. Cheevious Does Lingerie…. Football, That Is

In 2011, Lisa had to make a very difficult decision when diagnosed with the BRCA 2 genetic mutation.

From her blog: In 2010, my beloved, beautiful sister Mimi lost her battle with Ovarian Cancer. Her illness prompted my gynecologist to begin a personal campaign to get me to the genetic specialists at Cedars Sinai in Los Angeles. And when she passed away, my doc turned up the heat. She REALLY wanted me to be screened for Ovarian / Breast Cancer (they are related) gene mutations. So I succumbed. I went in for the screening, and more to the shock of the genetics counselors than to myself, I tested positive for the BRCA2 Gene Mutation.

There were a few choices available but having already had children and seen what my sister had gone through, I opted for the most aggressive approach to eradicating my elevated risks. I underwent a double prophylactic mastectomy (with breast reconstruction and implants) and at the same time, had them remove my ovaries and tubes.

I am so glad that I connected with Lisa and her “multiple personalities”. She is one of the most fun and inspirational people I’ve ever met. Someday I hope I get to tell her that in person. In the meantime though, here are some of Lisa’s / Ms. Cheevious’s Greatest Hits:

Fun Ms. Cheevious Blog Posts:
Are You Ms. Cheevious? * How Buffy the Vampire Slayer Rocked My World * My Phantom Ovary

Lisa Jey Davis Vlog videos:
What They Don’t Tell You In School About Aging * What to DO about What They Didn’t Tell You
Thoughts for the Day:
Never Give Up * Be Magnificent
Article first published as Inspirational People: Lisa Jey Davis on Technorati