Ashley Watkins has arrived. The Hollywood newcomer has already made her mark in the horror genre by playing the lead role in the Richard Swindell film, “Pelt“; her first feature film.

Ashley plays the role of Jenny, a level-headed girl whose instincts are put to the ultimate test when a camping adventure goes horribly wrong.

From the film’s website: Sudden, gory, death, hides behind every bush. When beautiful Jennifer and her friends embark on a backpacking excursion deep into the woods, they come chest to chest with an evil as old as the trees. Listen…above the crackling of the campfire…is that the sound of a twig snapping or your best girlfriend’s neck? The interlopers discover that when the locals warn you not to trespass, it’s a warning you should heed.

I recently spoke with Ashley and discussed her character as well as what she enjoyed the most about her experiences filming “Pelt”.

goJimmygo (gJg): I love your role in this movie. Your character is so dramatic and level-headed.

gJg: How did the role come about for you?

AW: The casting director gave me a call and told me about the audition. She didn’t have much information and the audition was that very night. I almost didn’t go because it was so last minute. But I went in, auditioned and got a call back. To this day, it’s still one of the best shoots I’ve ever been on. 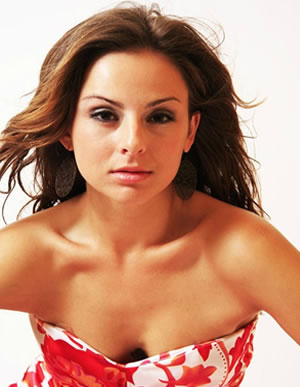 gJg: Did you originally audition for the role of Jenny?

AW: I originally auditioned for the role of Debbie and actually got a call back for that role. Sarah (Zurell) was the original choice for Jenny. During the table read, the two of us along with Richard (Swindell) decided that something just didn’t seem right. So, Sarah and I wound up switching roles and it worked out awesome for both of us.

gJg: What did you like most about playing the role of Jenny?

AW: It was a fantastic role to start off my feature film career with. I am a huge Wes Craven fan and “Scream” is one of my all-time favorite movies. Neve Campbell is one of my inspirations.

This was kind of like that role for me; the lead in a horror film. Jenny is smart and intelligent but she’s not being a superhero; she’s normal.

As a female actress starting out in Hollywood, it’s very rare to find good, strong female roles. Jenny was not only the latter, but intelligent as well. One thing that Richard did great was create all of Pelt’s characters as fighters, including the women.

Nobody just “accidentally” tripped over a log or instantly got killed. Every character went down with a fight!  So, it was great to experience that level of empowerment for the entire cast, and especially as a female. They didn’t just give up or give in!

gJg: What did you like most about making the movie?

AW: I remember how excited I was during pre-production when Richard was explaining his vision of Pelt to me.

Richard is a fan of Judd Apatow and I’m a big Wes Craven fan, so when he said he envisioned it to be a “Scream meets Superbad!” I smiled REALLY big! I knew right off the bat; this was going to be great! It’s a horror cake frosted with comedy!

I’m also a nature freak so for me, getting out of the city was a lot of fun. Then of course, we had such a great cast and crew. We were out in a remote area where there was limited cell phone service and contact with the outside world.

The location scouting was also amazing. I remember the tower scene, it took us 45 minutes just to get there and pretty much everything you see inside was already there.

gJg: What’s the story of Pelt?

AW: Pelt is the story about seven young friends who go out exploring the uncharted territory of the woods and unfortunately, begin to get knocked off one by one. It quickly becomes the process of survival. For me, it was more of a mind game. It’s a horror story with over the top goriness but also has some funny moments mixed in as well.

gJg: Were you always involved in the arts while growing up?

AW: I figure skated competitively & danced here and there for many years during my childhood. I then transitioned fairly easily into dance during college because of my skating background. When I moved to LA, I started with a few small dancing gigs, which eventually lead into a full professional dance career.

I have been blessed to make a living as a dancer for the past three years, while pursuing acting. I get paid to work out and enjoy losing myself in the moment to music!

gJg: You’ve also done some TV work as well. What would you say are the differences between filming a feature like “Pelt” as opposed to “Entourage”?

AW: It’s cool to be on set for television, but unless you’ve got a specific role, it’s only a one day taping. For Entourage, I was a featured dancer. As far as films go, you become more like a family when you make them. You develop as a character, as an actress and a person.  But most of all, as is the case with Pelt, you also make great friends for life!

Article first published as A Conversation With Actress Ashley Watkins on Technorati.