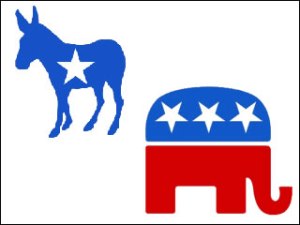 Just a quick little rant from an observation I made.

Yesterday, I noticed that someone had posted a political picture of Barack Obama and Mitt Romney on their Facebook wall. The picture featured both candidates along with “quotes” they had made (and was obviously pro Romney). The person who posted the picture left no doubt as to who she was going to vote for.

Now, we all know how these pictures work: on one side, the “bad” guy (in this case Obama) is pictured in an ominous blue color, posing with an angry look on his face with quotes taken out of context. On the other, a bright, cheery photo of the “good” guy (Romney) speaking passionately with a bunch of supporters along with quotes he made on how to make America great again. Typical ads that both sides use and ones that everyone has seen a million times during every campaign season.

What was disturbing though, were the comments that followed….

One person, obviously a “friend” of the person who posted the picture, wrote a comment saying how disappointed she was in her “friend” because she was going to vote for Romney. That comment was replied to by the person who posted the picture asking why she was disappointed? The conversation went back and forth and eventually, more and more “friends” started chiming in. Before long, everyone was going back and forth with the same tired old narrative:

1. How could you vote for someone (Romney) who hates women?

2. Why would you vote for someone (Obama) who takes money and gives it to people who don’t want to work?

It’s kind of sad to think that friendships, some of them possibly life-long ones, could be lost or strained over something as simple as a photograph posted on a social networking site.

Everyone is entitled to their own opinion and can vote for whoever they want. We should respect that. After all, isn’t that what men (AND women) of this country have fought and died for?

The real problem when you think about it is not who you vote for. Because it doesn’t really matter who wins this election. In the end, we’re ALL screwed anyway. And in four more years, we’ll do it all again. There, I said it.

As far as friendships go, this incident only reinforces something my grandfather told me a long time ago: Politics (and religion) needs to stay out of three things: my wallet, my bedroom and public discourse.

6 thoughts on “A Political Observation”