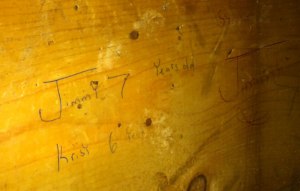 I’ve often thought about the possibility of making a time capsule.

For those who may not know, a time capsule is a container you fill with messages, articles of clothing and knickknacks that represent the current age. Then, you bury the container in the ground for some future society to discover.

My brother, a real handyman who still lives in the same house he and my sister had grown up in, made one of those interesting discoveries the other day while doing some remodeling.

The small, turn of the century colonial we lived in was originally owned by my grandparents and over the years, my brother has done a lot of extensive work to it. He’s torn down walls, installed new floors and fixtures and even put windows where none previously existed. In fact, the only portion of the house he hadn’t really tackled before was the make shift bathroom my father had built that lied on the first floor.

Since it was the only bathroom in the entire home and would be an expensive endeavor, not to mention a huge inconvenience whenever nature called for the next few weeks, he had put off remodeling it. Finally, the circumstances were right and the demolition could begin.

Upon tearing down many layers of paneling he made his discovery and immediately called me. I rushed over.

Lying beneath the torn, weathered particle board was writing. Some of it written by the hand of an adult, and some by the hand of a boy who would one day grow up to write this blog.

As I shined a flashlight up on the wall to get a closer look, it reminded me of what Egyptian archaeologists must have felt like when they discovered an ancient tomb of some long dead pharaoh. Would the scribble indicate what was housed beyond the great wall? Or perhaps there would be a silly warning I had written to future generations not to proceed any further. Nope. There wasn’t even a map leading to the location of my lost Spiderman action figures. Damn! But, what it was turned out to be something even better.

The first thing I had written on the wall read the following:

Seven was the age I would have been when I wrote it; which would now be thirty-five years ago. Below my name was written the name of my sister Krissy, who was 6 at the time.

I found myself staring at the scribble for the longest time. Touching it. Running my fingers across the letters just to make sure it was real. The memory of writing it, once long-buried by life, had suddenly come back to me, and I remembered every vivid detail about writing it on the wall just before Dad covered it up with paneling.

I could picture the platinum-blonde, seven-year old boy writing his name and age on the wall. Making the most of his third grade education by trying to use proper spelling and pushing his pencil deep into the surface of the wood to make sure the lead was visibly transferred.

Finding something this cool from a general time period is amazing, but being able to pinpoint the exact day that it was written is something even better. Fortunately for me, on an adjacent wall my father had done just that. Below the names of other family members who had been present at the house that night, he had written the exact date the paneling was placed on the wall: “June 9th, 1977”

Now, I’m pretty sure the last thing on Dad’s mind at the time was: “Hey, let’s see what we’ll all be doing thirty-five years from years now when we find this!”,  but I really wish he would have been alive for this amazing discovery. I can only imagine the conversations we would have had about it for the remainder of the day.

Next to the date, Dad had written down his name (Louis) along with my mother’s (Joanne) and for some reason, decided to include the date that they were married: “April 2, 1966”.

Sadly, their marriage would not last, but the memory of this project, once long since forgotten is now one I’ll treasure for years to come.