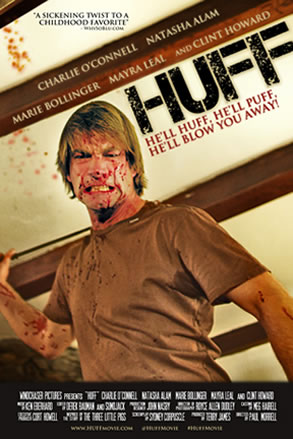 Charlie O’Connell and Natasha Alam have some serious chemistry going on in HUFF, a twisted take on the fairy tale classic “The Three Little Pigs”. O’Connell is creepy in the role of Huff, an unfaithful husband and abusive step father to three teenaged daughters living in poverty in California.

When a drug deal to set him up for life goes awry and the daughters leave with the money, Huff takes out his anger on those around him in a mad attempt to retrieve his loot. His only weakness? An asthma induced need to use an inhaler which may give the girls a fighting chance of survival.

Natasha Alam is amazing in the role of Laci, Huff’s beautiful mistress. Her sexiness and charm is equaled by the way she is freely able to express emotion on-screen during troubling situations; particularly when she is being threatened by Huff.

I spoke with Charlie and Natasha about their experiences working on “HUFF”, a film set for world-wide release next Spring.

What did you like most about the role of HUFF?

CO: I’ve always loved horror and slasher movies. I normally play a really nice guy or a jock, but definitely not a villain, so getting the chance to do that with “HUFF” was something that I really liked. Also, in some horror movies (ones with a Jason or a Freddy Krueger), those guys wore masks. I enjoyed the fact that I got to play a really evil guy who didn’t wear a mask. I didn’t have anything to hide behind, except for the inhaler that I had to work with.
How was it working with such a great cast?

CO: Everyone did a great job. Elina (Madison) has done a few of these types of movies before and played it like a veteran. Marie (Bollinger) was great as well, particularly in the scene where I’m in the bedroom with the youngest daughter (Elly Stefanko) and she steps in to protect her. That was a great scene.

Were there any challenges to shooting the film?

CO: We were shooting close to Valencia, CA and I remember it was so cold. Those last scenes where I had to run around with my shirt off could possibly have been the coldest days of the year in LA [laughs]. The weather was probably the hardest thing to deal with.

CO: I’d have to say the scene where Marie carries Elly on a huge, long trek was the funniest.There’s a quick cut in the scene which works perfectly because she just couldn’t carry her anymore. I had already wrapped for the day but wouldn’t leave because I wanted to see it. I remember taking bets on when she was going to drop her. She must have carried her at least 500 yards that day. But that’s the kind of trooper Marie was. And when she finally did get finished, Paul (Morrell, Director) said: “Great! Can you do it one more time?”.. [laughs]

CO: Probably the one where the guys come to the door to get the drug money. When it comes to horror movies that may not have the biggest budget, it’s the little things that become the most important: the editing, finding out what works and what doesn’t work, the death scenes. That particular scene flew so well. It was such good violence right off the bat. But that’s what kind of movie this is. It’ a bloody/slasher/thriller. When you see that scene you say, “Holy S%iT! I’m in for something here!”

The scene of you with Shay (Elly Stefanko) near the hay stack is pretty creepy too.

CO: Yes, the crossing from far and then coming up on her! Elly did a great job. It was the first film she’s ever done and she put a lot of work into it.

What do you liked most about seeing the completed film?

CO: One of the things I enjoyed the most was seeing which takes were chosen and which ones were left on the cutting room floor. I really like to see what works and what doesn’t make it.

We also did quite a few screenings of the film at festivals and I found myself crouching at times because it was so creepy. Paul did a great job.

What attracted you most to the role of Laci?

NA: It was a great chance for me to really showcase my acting skills and give me the opportunity to do more action and drama.

NA: It was awesome. I felt really good about it. Initially, there was another actor auditioning for the role of Huff who was a lot shorter than Charlie. He was a great actor, but just didn’t look right for the part. When Charlie came in, we complemented each other so well. 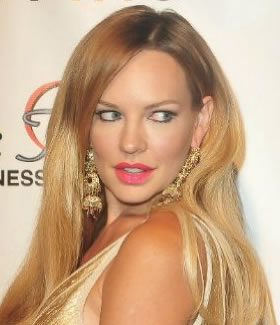 Were you at all inhibited by the risqué’ bedroom scene?

NA: Not at all. Prior to this role, I had worked on ‘True Blood’ which has very racy, skin showing/revealing scenes. That was my first experience into sexiness and  being racy and it made my scenes in ‘HUFF’ that much easier.

How are you able to “turn on the tears” so easily?

NA: Before I actually had a child of my own, I couldn’t feel that emotion and know how to play those kind of roles. It just didn’t feel natural. But, after having my daughter and now having those feelings, it was an amazing discovery. To play a role like this you need to have some kind of experience of what it might feel like to lose someone. For the scenes where Charlie wasn’t letting me go, I based that upon past bad relationships. You usually can dig into your past and re-live that emotion again.

How did you get started?

NA: I was going to school at the University Uzbekistan (my home country where i was born and raised), but civics and mathematics didn’t really agree with me [laughs]. Although I am interested in that now, back then I wasn’t interested at all. I was more drawn to fashion, acting and being a designer; something that was creative. So I was studying at University and at the same time going to college to study fashion design.

After about a year and half, the opportunity came along for me to go to Milan and become a model. I quickly jumped on that and went out to discover the world.

What projects are you working on now?

NA: I just finished a guest-starring role for an episode of ‘Body of Proof’ which was a wonderful experience. The episode should air sometime next year.