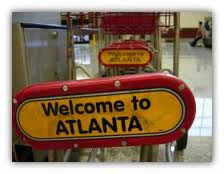 My job in information technology requires me to every so often take a trip out of state for a three-day educational class. Usually, the topic is something bland that would bore the average person to death; myself included. I mean let’s be honest, is there any sane person who would want to travel to a major city and then have to spend the better part of the next three days stuck inside some old stuffy classroom talking about databases and SQL queries?

I’m not a big fan of these excursions, and I’m what you call a last-minute person when it comes to preparing for these kind of trips. Call me a homebody or whatever but the truth is, I’m not one of those people who starts making plans and packing a week before leaving. I also don’t research the city I’m going to very much and always wait until the very last-minute before digging out the small suitcase that’s just small enough to be used as a carry-on (yeah, I’m cheap that way). Considering that the weather was going to be beautiful and that I would be making the trip to Atlanta solo this time around, it only made me lament having to go even more.

My arrival in at Atlanta on Monday was pretty uneventful. I rode the Marta from the airport to Dunwoody station with the biggest bunch of Louisville basketball fans I had ever seen in my life. These folks were on their way to the NCAA Championship game and were dressed all in red and whooping and hollering about how in just a few hours, their team would be crowned king. It was pretty cool to watch them.

It wasn’t long before I arrived at the hotel and took to my room. The first thing I noticed after dropping my baggage onto the bed was this giant device sitting next to the nightstand. It was a piece of technology that I had never seen before. An electrical, unplugged contraption that had more knobs and controls than the space shuttle. It didn’t take long for me to realize that this thing that was almost as big as a toaster oven was actually some new fangled, 21st century alarm clock. But rather than try to figure out how to work it, I thought it would be easier to just use my phone’s clock to wake me up each morning. I set the alarm for 6 am and used a song from my music collection as the alarm. I knew that I would probably never needed it though. I don’t sleep well these days and would most likely be up before the alarm sounded and turn it off.

The class itself was as you might have expected – dull and boring. I met some interesting people who worked at a hospital in Alabama, took long walks with our 90 minute lunch breaks and hung out in the outside gardens enjoying the crisp, spring Georgia weather in the late afternoon. It wasn’t until yesterday that things started going south.

During class, someone mentioned that there was a huge line of rain and thunderstorms that would arrive in the area on Thursday, just as class was getting over and I had to make my way back to the airport. Wonderful. Being the worry wart that I am when it comes to airline flights, I could already see that long delays at the airport were in my future and my 8:55pm flight home would be pushed back to well after midnight… or later.

Then on the walk back to my hotel after class, I began to have this weird feeling in my right foot and when I touched it, a sharp pain ran up my leg. I took off my sneaker and sock to discover that the pinky toe on my right foot had turned into a purply, blistered mess from all of the walking I had done the last two days. (Note to self: get better sneakers)

Remember when I said that I don’t sleep well most nights? Well, last night was one of the worst. I kept dreaming that I had left my wallet at the airport security checkpoint and when I went back to retrieve it, all of my money and credit cards were gone (hopefully not an omen of things to come).

This morning, I woke up in a daze and jumped out of bed at 4:45; nearly ninety minutes early. I decided to clear my head and take a walk to the local Starbucks before class. But just to be safe, I checked my wallet and confirmed that I still had money and a usable line of credit. All good.

As I’m leaving the hotel I start hearing music coming over the intercom. It’s Jimi Jamison’s song, “Never Too Late”, one from his recent solo album. “WOW”, I thought to myself. They actually have that song playing in the hotel mix in Georgia. Pretty cool. I continued my short walk to the coffee shop next door enjoying the music playing off in the distance.

It wasn’t until I walked up to the Barista that I noticed something wasn’t right. Everyone in Starbucks was staring at me. It was then that I finally felt the vibration in my pocket. I pulled out my phone and noticed that my alarm was going off and was playing (you guessed it): Never Too Late.

In all of my worrying about getting to the airport, having my wallet hocked and a delayed flight, I was oblivious to the alarm that had been going off in my pocket for the last ten minutes.

One thought on “Atlanta”